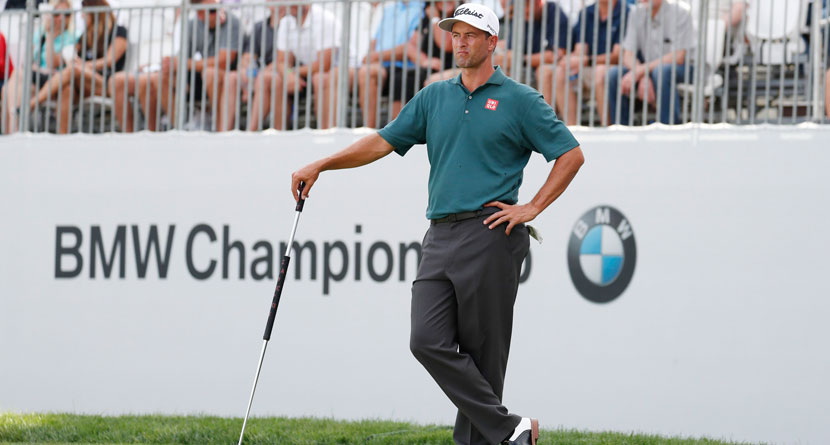 One of professional golf’s most historic venues, Medinah Country Club’s No. 3 course, was made mincemeat by the best players in the world at this weekend’s BMW Championship, and at least one major champion spoke out encouraging the PGA Tour to “think smarter, not longer.”

Australian Adam Scott has long been one of the most thoughtful guys on Tour as well as one of the best players in the game, so when the 2013 Masters champion is critical of something, it’s a safe bet that he’s not alone in his criticism.

Speaking to the Australian Associated Press, Scott bemoaned that the 7,600-yard setup at Medinah wasn’t the answer to neutering scoring among today’s Tour pros.

“They haven’t figured out yet that long means nothing to us; you can’t build it long enough,” Scott said after firing a 3-under par 69 on Saturday. “I’m not (surprised to see low scores at Medinah); if a golf course is soft we are just going to tear it apart.”

Scott says the art of driving will vanish from the PGA Tour and scores will continue to blow out unless officials do away with weak golf courses. https://t.co/c09JP8AvhP

And tear it apart they did. Over the course of the four days, the course record was tied or set four different times. Justin Thomas and Jason Kokrak tied the course record of 7-under par 65 on Thursday, only to see Hideki Matsuyama best it by two shots on Friday. Thomas again regained the honor on Saturday firing a scorching 11-under par 61.

Scott argued that unimaginative golf courses are to blame. The strategy and skill required to work a ball around these courses have been lost to a chase for more distance.

“I’m not challenging (PGA Tour officials and course designers) to build longer golf courses; I’m challenging them to build smarter golf courses,” he said. “If you require us to shape tee shots to get it in play, we’re going to struggle. We just play straight, everything is straight. While there is an option to go over trees and over bunkers, it is just relentless.

“The driver is the most forgiving club in the bag now. You swing as hard as you can and get it down there far, it’s not skillful. It’s not a skillful part of the game anymore.”

Scott’s criticisms were echoed by eventual champion Justin Thomas as well as Tiger Woods, who gave a thoughtful answer about the way the game has changed in the years since he last won at Medinah in 2006 at the PGA Championship at 18-under par.

“I think that’s the way the new game is played,” Woods said after a Saturday 65. “We were talking about that earlier this week is that when I first came out on Tour and before me, especially, there’s a lot of 1-irons and stiff off the tees. Just kind of get it in play. Now, you just pull out driver, bomb it down there and you’re looking for three to four good weeks a year. That’s how you play. It’s not the consistency, it’s not about making a bunch of cuts. It’s about having three, four good weeks a year. That’s the difference. The guys understand that.

“Today’s equipment you can maximize a driver and just absolutely just bomb it and some of the guys sacrifice stuff around the greens or short irons for the driver. The driver is the most important club in the bag now just because of the way the game is played.”