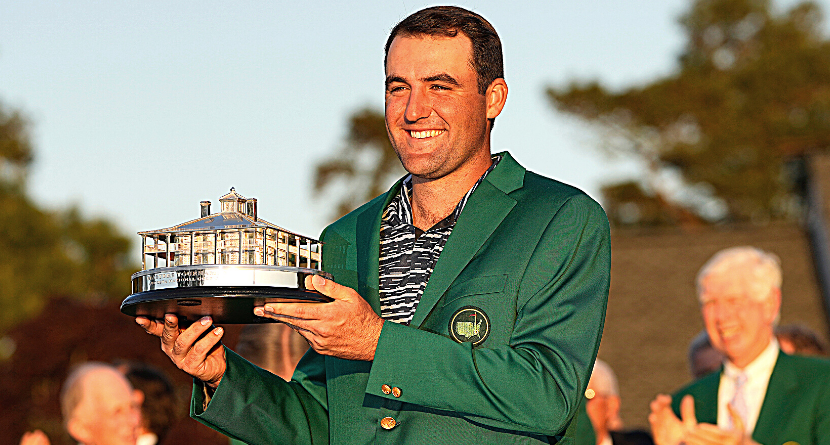 Among the congratulatory messages to come Scottie Scheffler’s way in the aftermath of his Masters win was a hand-written note from a fellow Texan whose famous letterhead gave away an otherwise indecipherable screed.

The letter’s author? Former President George W. Bush, who, at age 75, might be better off with a paintbrush in hand than a pen.

“I hear he’s a good artist now. He’s got to do some work on his handwriting,” Scheffler said ahead of his return to competition this week at the Zurich Classic. “Stuff like that is pretty cool. To have someone like that reach out just to congratulate me is pretty special. That’s probably kind of the only moments I’ve had where I kind of sit and reflect on what’s happened the past month and a half, two months. Obviously the Masters is such a different event than the rest of them. Just getting some messages like that from people I’ve looked up to for so long is really special.”

Ryan Palmer on how he got Scottie Scheffler to agree to team up for the Zurich Classic:

“The thing that really sealed it was I sent a picture of me and Jon with the trophy, but I imposed his face on it.”

Scheffler, 25, a 2018 graduate of the University of Texas, said his wife, Meredith, has rounded up some of the social media praise directed at him since becoming the fifth player to slip on the green jacket while ranked No. 1 in the world. And while hearing from the likes of Michael Phelps and Cowboys running back Ezekiel Elliott registered as pinch-me moments, the 43rd president’s words carried more weight.

This week marks Scheffler’s first start since the Masters, and he’s got outrageous standards to uphold. A winner in four of his last six starts dating back to his breakthrough at the WM Phoenix Open, he has created a sizable gap between himself and second-ranked Collin Morikawa in the Official World Golf Ranking.

Scheffler is teaming up with veteran Ryan Palmer, another Texas guy with a solid track record at TPC Louisiana. Palmer won the event in 2018 alongside former world No. 1 Jon Rahm, but he insists he isn’t intentionally hitching his wagon to some of the game’s hottest players.

Hey @RyanPalmerPGA whats the average world ranking of your partner in the @Zurich_Classic?? I’m gonna guess around 1.3 between @JordanSpieth @JonRahmpga and Scottie!! 😂

“Word out there is I’m chasing ringers, but I kind of put it out there – they’re asking me to play,” said Palmer, 45, who’s also teamed with three-time major champ and former Longhorn Jordan Spieth. “I’ve been out here long enough. Maybe I can give a little veteran advice. I look at it as they’re playing with me, so I’ve got a little bit to add to it.”