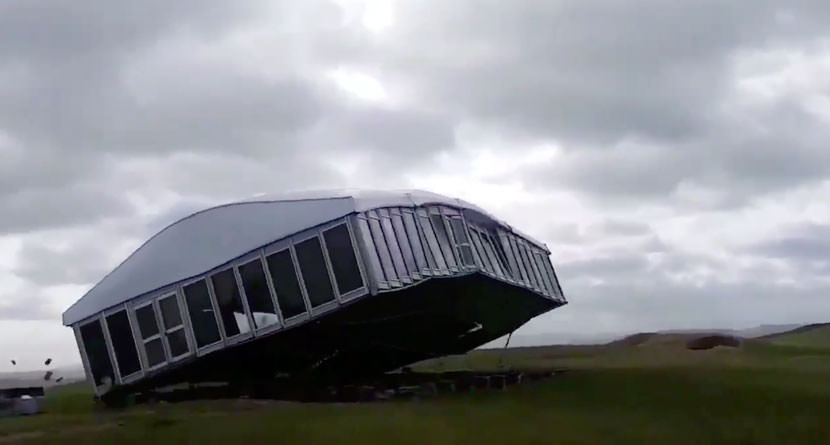 While the golf world’s collective gaze descended upon the wind-swept Shinnecock Hills on Thursday of the U.S. Open, another national open site was feeling the wrath of Mother Nature as well.

Gullane Golf Club in Gullane, Scotland was battening down the hatches as Storm Hector blew threw the United Kingdom. The host of next month’s Scottish Open has some of the required infrastructures in place, but after high winds on Thursday, there will need to be some clean up before the Open Championship’s traditional warm-up event.

Karen Ballantyne shared a video in response to former European Tour golf and current Sky Sports golf broadcaster Ewen Murray showing a hospitality tent being lifted off the ground and blown away.

If you think that’s breezy check out Gullane, hope this isn’t your media tent! pic.twitter.com/5D3DGPZcKy

Robert sent me this ? pic.twitter.com/Jqgz5quh6D

Tournament organizers have just under a month to rebuild the hospitality tent as well as repair any other damage caused by the storm.

The Scottish Open has become a popular Open Championship tune-up for many of the game’s best players drawing big names such as Rory McIlroy, Phil Mickelson, Matt Kuchar and Rickie Fowler, among others in recent years.