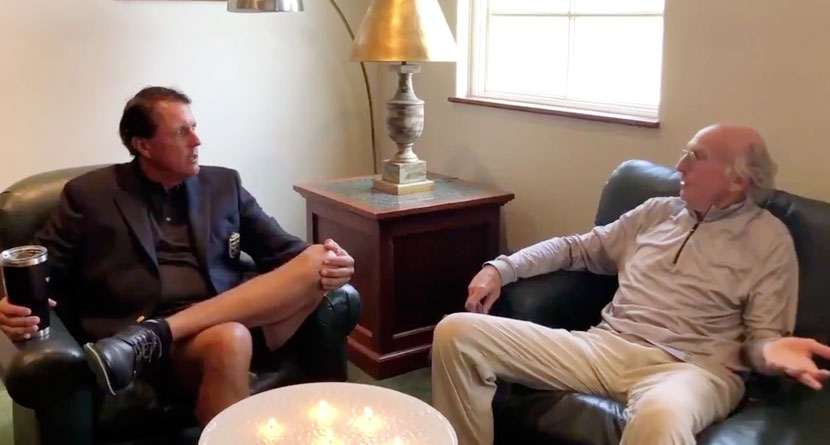 In today’s day and age, it takes a lot to get folks to sit down and watch a seven-minute video clip, but if there were two guys who could make golf fans of a certain age or sense of humor stop in their tracks, it’s Phil Mickelson and Seinfeld co-creator Larry David.

Mickelson teased multiple times that LD would be joining him on an upcoming episode of “Phireside with Phil,” Mickelson’s guerilla talk show that is more Between Two Ferns than Inside the Actors Studio.

Played golf with my next Phireside guest. It will air next Tuesday at noon ET. Although it is 7 minutes long, you won’t want it to end. Have a great weekend ? #PhiresideWithPhil pic.twitter.com/MrKrYOGdyV

When the episode finally hit social media, the build-up was masterful with the payoff coming down the stretch as David explained how his brother halted a promising — even potentially Hall of Fame-worthy — golf career by slamming his fingers in a car door the day he shot his first sub-70 round.

Paying tribute to Larry David and all the people who continue to love and play the game – even if their childhood dreams of being a hall of fame golfer were ripped away by a jealous brother. Enjoy this special #PhiresidewithPhil on #TributeTuesday. pic.twitter.com/SoHYgpVbP2

While the two felt each other out in the setting, David needled Mickelson for wearing his Hall of Fame jacket during the interview, and soon found out what he was up against when he asked why Mickelson wasn’t wearing “that ridiculous green jacket they hand out at the Masters.”

“Which of the three?” Mickelson responded. “They’re scattered all over.”

From there the barbs came fast and furious with Mickelson playing coy about David’s Emmy awards — “What’s that? Is that your daughter?” — before the true master, David, got the last laugh by busting Mickelson’s chops for blowing the 2006 U.S. Open at Winged Foot.

“Hey let me ask you a question,” David began. “Are you going to be playing in the (U.S) Open this year or do you have a graduation coming up?”

“I am going to play in the U.S. Open,” Mickelson said, teeing up David perfectly. “It’s going to be at Winged Foot.”

“Ah, Winged Foot!” David exclaimed. “Is that so? Winged Foot! Ah. Yes, I recall a previous Open there. Maybe 12 or 13 years ago. 2006…I remember on the 18th hole as you were teeing off, I remember you took a driver out of your bag. I must say, I was thinking to myself, ‘What could possibly be going through that idiot’s mind?’”

“Well, I could share with you, but I don’t know, either,” Mickelson responded.