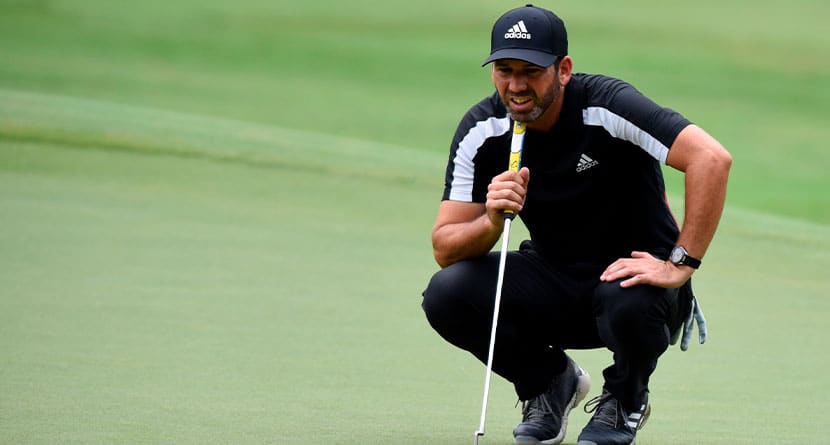 Sergio Garcia has been keeping a secret from golf writers and fans for the last three years: he putts with his eyes close.

“How do you know this?” Garcia asked a writer who opened up his media availability by asking Garcia how long he’s been putting with his eyes closed following a second consecutive 4-under par 68 at the Sanderson Farms Championship. “Would you believe me if I told you I’ve been doing it for about three years?” Garcia responded.

That’s when everyone started taking a closer look at Garcia on the green, and it’s clear, he does close his eyes while stroking his putts. What’s more? He said he putted the entire 2017 Masters with his eyes closed. You know, the one he won.

Sergio on putting with his eyes closed:

“I’ve been doing it for about three years. I just let my natural ability kind of take over instead of telling myself what to do… at. Augusta, I won with my eyes closed every single putt.” pic.twitter.com/q5OxOoOlNK

“I’ve gone on and off, but like Augusta, I won it playing with my eyes closed every single putt and some of the other wins, too,” Garcia explained. “I feel like it gives me a little more freedom to feel the stroke. Sometimes we get too focused on trying to make it perfect and kind of following with the eyes and everything. So this way I feel like I just feel it and I just let me natural ability kind of take over instead of telling myself what to do.

“I think it was probably me just practicing and trying to feel something. But it was a while back. It was probably almost four years ago. You know, I would love to putt with my eyes open, but I feel like my stroke is more consistent when I kind of try to forget about it and just kind of feel it. That’s what I’ve been doing.

“At the end of the day we all try to find a way to feel comfortable. Jordan used to putt looking at the hole. It’s kind of like the same thing. Just kind of forgetting about the stroke a little bit and just kind of feeling and letting your natural athletic ability to take over, I guess.”

Garcia has always been known as an exceptional ball striker, but his putting has let him down on various occasions over the course of his career, which he blames for being too mechanical and less feel-based, and while his season-long statistics do not bear out an eye-popping trend of improved numbers, when he plays well — and wins, as he did this weekend — he putts pretty solidly.

“These greens obviously help because they’re very fast, so yeah, I felt like I’ve hit a lot of good putts,” Garcia said, who finished the week +2.830 in strokes gained: putting. “I made a few, I’ve obviously missed a few, but the feeling overall is very positive.”

On Sunday, it was a complete performance that allowed him to chase down the early-posting Peter Malnati and win by one stroke thanks to a clutch 72nd-hole birdie.

So, the question becomes can Sergio’s putting technique help you? Why not?

“Yeah, why not?” Garcia said when asked if recreational golfers should try putting with their eyes closed. “If they feel like they struggle with it, maybe. I don’t know. At the end of the day, you do what you feel is best for you. It’s as simple as that. There’s no right or wrong. Obviously, everyone wants to do it perfectly and the way it should be. It doesn’t mean that it’s the right way or not. But the way it kind of should be. But we’re all different. We’re all different players, and everybody feels different things, and you’ve just got to try to see what feels best for you.”