Garcia Under Fire For Wentworth Withdrawal 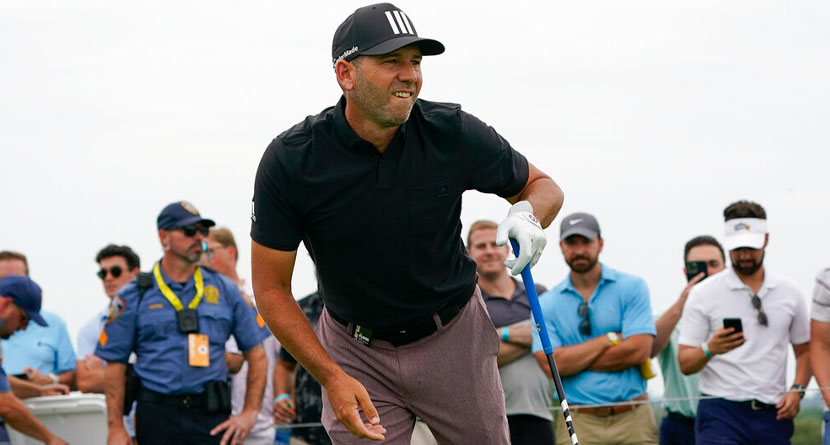 Former Masters winner and current LIV golfer Sergio Garcia withdrew from the BMW Championship last week, apparently in order to attend a University of Texas football game, which is not a valid enough reason for DP World Tour brass.

Garcia’s actions suggest that despite ongoing lawsuits against the PGA Tour and others, LIV players may regard access to sanctioned tournaments rather more cavalierly than their rhetoric (or their lawyers’) may suggest.

Last week’s BMW PGA Championship was conducted at the renowned Wentworth Club, located in Surrey, just outside London, and not far from Windsor Castle, seat of the British monarch.

The tournament is one of the most significant of the DP World (née European) Tour, regularly attracting top players from both the PGA and European Tours due to the fact the tournament had been designated the DP World Tour’s “premier event,” which until the recently-unveiled changes to the Official World Ranking resulted in a boost in ranking points.

Still, the prestige of the event has carried over despite a drop in world ranking points, and it once again drew a strong field, including 15 golfers who primarily play on the LIV Golf circuit, including Garcia.

The 2019 Masters champion posted an opening-round score of 4-over par 76 on Thursday. Play was suspended on Thursday evening following the announcement of the death of Queen Elizabeth II and subsequently shortened to 54 holes.

With Garcia on the outside of the cutline, the 42-year-old Spaniard withdrew from the event on Friday and made his way to Texas, where he appeared on the sidelines of the UT-Alabama football game.

Sergio Garcia WD’d from the @BMWPGA but thankfully is healthy enough to attend Texas v Alabama game today back in the states 👍 #LIVGolf pic.twitter.com/VpZVdOtmIR

According to a report from The Telegraph, Garcia is facing disciplinary actions from the DP World Tour should he not disclose a reason for his withdrawal.

The DP World Tour rules handbook states a player may only WD for “emergency reasons or medical circumstances deemed reasonable by the tournament director.”

As of Tuesday, the Tour had not received a reason for Garcia’s WD, and unless one is comes from Garcia or his management team in a three-week window, he will be hit with a financial penalty.

Why LIV Golfers Were Playing The BMW PGA Championship

World ranking points help to determine entry into other tournaments, particularly the majors, which is why several LIV Golf players have filed lawsuits against the tours as LIV currently doesn’t receive rankings points.

In a letter written in August, LIV Tour commissioner Greg Norman insisted, “Without LIV’s inclusion, the integrity and accuracy of the rankings themselves are severely compromised.”

To some, the timing of Garcia’s WD confirms some of the worst accusations leveled at LIV players.

Four-time major winner Rory McIlroy described LIV golfers as “selfish” in June. Withdrawals for reasons other than injury are generally frowned upon on the most prestigious tours, on the grounds that it deprives both the fans and other golfers of potential opportunities.