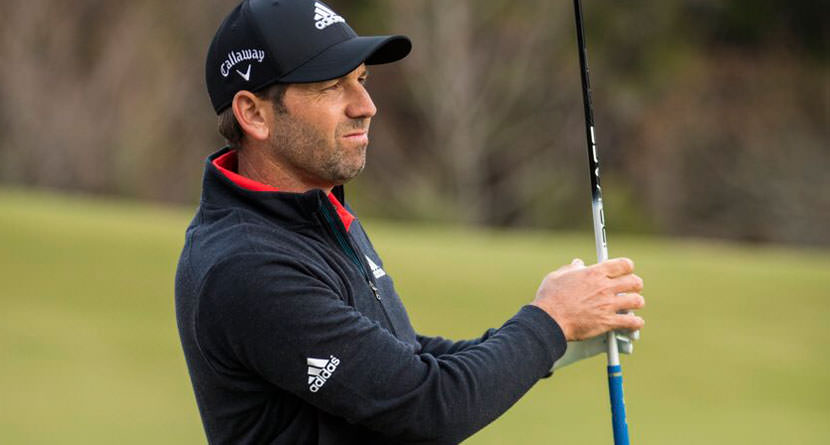 Sergio Garica was the biggest equipment free agent in professional golf in 2018 and the reigning Masters champion has landed with a familiar brand: Callaway.

Flipping the page on a new chapter.

Garcia’s move to the chevron has been rumored since news leaked that TaylorMade would not be re-upping with Garcia, instead focussing their marketing dollars on a few other big fish.

Garcia was able to ease his way into some Callaway equipment over the end of his competitive year in 2017 and will have a full bag of Callaway equipment when he kicks off his 2018 campaign at the SMBC Singapore Open in two weeks.

So excited to join the @CallawayGolf family! Can’t wait to get started with all my new equipment at the #SingaporeOpen January 18th and defend my title the week after at the #OmegaDubaiDesertClassic https://t.co/8g8czxAFed

Coming off one of the best seasons of his professional career, Sergio Garcia will begin a new chapter on the equipment front in 2018. The reigning Masters champion agreed to terms on a multi-year equipment deal with Callaway Golf that will see him use 14 Callaway clubs, a Chrome Soft golf ball and display the company’s logo on both sides of his hat as part of the agreement. Financial terms were not disclosed.

“I’m really excited to switch to Callaway,” Garcia said in a release. “After testing different brands I realized Callaway`s technology and innovation will help me maximize my game and perform to the best of my ability.”

While Garcia’s deal didn’t become official until Jan. 1, there were signs going all the way back to the Dell Technologies Championship, in August, that hinted a change could be on the horizon.

Unlike most equipment deals that require a player to see out the remainder of their current contract before using different gear in competition, Garcia has enjoyed the luxury of playing and testing Callaway equipment as a free agent for the last few months — he won with a Toulon putter and Callaway wedge in the bag at the Valderrama Masters — which means there likely won’t be a significant learning curve on the course when he tees it up for the first time this year.

According to Tim Reed, Callaway’s SVP, global sports marketing, Garcia has worked extensively with the Tour department to dial in the specs on every club in the bag, to promote “maximum distance, accuracy and control.”

“The launch monitor doesn’t lie,” said Reed. “[Callaway’s] Jailbreak driver technology has upped his distance off the tee. And the combination of Apex irons, Mack Daddy 4 wedges and our Chrome Soft ball has given him tremendous control on approach shots, and around the green.”