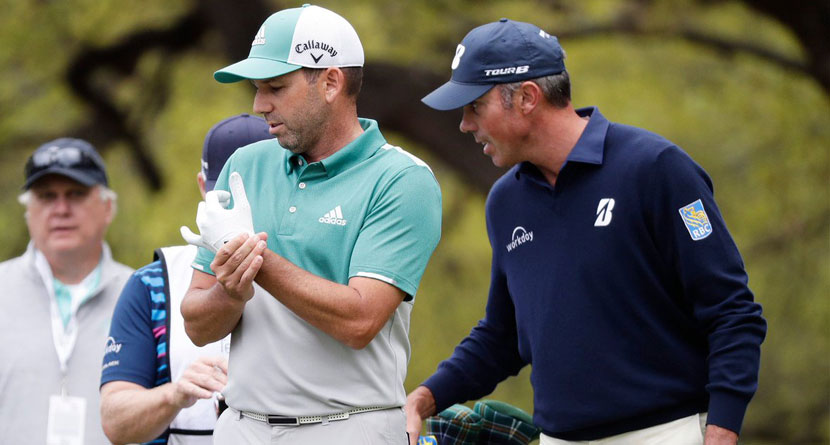 Sergio Garcia and Matt Kuchar, two of the principal characters in controversial storylines already this year, found themselves mired in yet another dispute on Saturday at the WGC-Dell Technologies Match Play Championship.

Facing off in a quarterfinal match, the pair played the first six holes incident-free, but a sloppy seventh hole by Kuchar, which was salvaged by a putt from off the green for bogey led to a bizarre series of events.

Garcia faced a 7-foot par putt to win the hole, but he missed it left of the hole. Frustrated, Garcia walked towards his ball four inches from the hole and nonchalantly backhanded it toward the hole, resulting in a lip-out, but he did so under the assumption that the 4-inch bogey putt was conceded.

What ensued was a conversation between Kuchar and Garcia in which Kuchar told his competitor that he didn’t concede the putt — he was certainly planning to, but Garcia in his haste did not give him the opportunity to do so.

“As I looked up again, I saw he had missed the next one,” Kuchar said after the match. “I said, ‘Sergio, I didn’t say anything (regarding a concession), I’m not sure how this works out.’ I didn’t want that to be an issue.

“So I asked (rules official) Robby Ware, I said, ‘Listen, I don’t know how to handle this, but I didn’t concede the putt, Sergio missed the putt.’ Sergio said, totally his mistake. He knew he made a mistake.

“I didn’t want that to be how a hole was won or lost. And he said, ‘Well, you can concede a hole.’ I’m not sure I’m ready to concede a hole. And just the rule played out with Robby stating how the rule works.”

After the ruling, Sergio dropped to 2-down with through seven and he would go on to lose the eighth hole as well to get it 3-down, letting his frustrations show.

All the while, the conversation in the pairing heated up.

Garcia, who famously found himself in a similar situation, but on the other side of things in 2014, pleaded with Kuchar that if he didn’t want to win the hole in that fashion, he was able to concede a subsequent hole in a good-faith effort to make things right.

As Kuchar said, he didn’t like the idea of conceding a hole, so the remainder of the match was played under tense conditions.

“I would have given you the putt on the next hole,” says Sergio. pic.twitter.com/sYhICydCua

After the match, which Kuchar would go on to win 2-up, cooler heads seemed to prevail with Garcia taking the blame.

“It’s quite simple. I screwed it up, it’s as simple as that,” Garcia said, according to GolfChannel.com. “The only issue that it was, was that (Kuchar) was like, ‘I didn’t say it was good, but I don’t want to take the hole.’ So, I was like okay, it’s fine, what do you want to do? Because there are many options that you can do if you don’t want to take the hole, even though I’ve already lost that hole. But obviously, he didn’t like any of the options that were there.”

While the entire situation was borne out of Garcia’s error, some believed Kuchar to be disingenuous is seeking out a rules official knowing full-well that the outcome would work in his favor.

Regardless, Garcia was sent packing and Kuchar advanced to Sunday’s semifinals where he will face off against Lucas Bjerregaard for the right to play the winner of the Francesco Molinari vs. Kevin Kisner match.