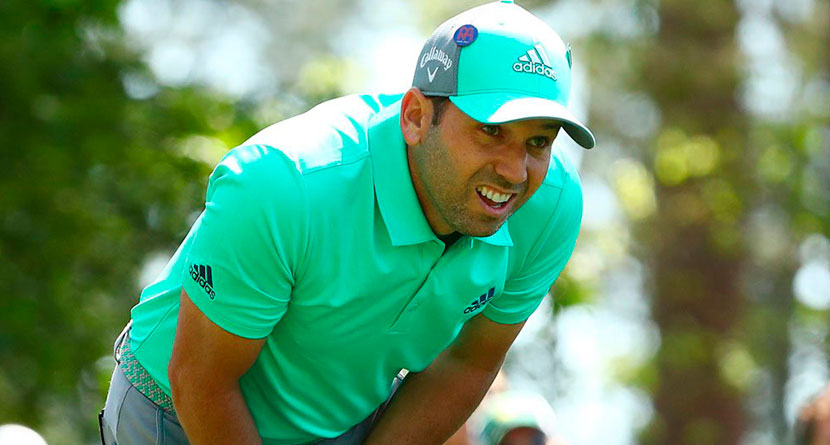 You can’t win the Masters on Thursday, but you can definitely lose it. Last year’s Master champ Sergio Garcia found that out the hard way in his first tournament round at Augusta National as a major champion.

Playing the 15th hole, Firethorn, Garcia had a meltdown for the ages. Garcia made an octuple-bogey 13 on the par-5, thanks to five shots that found the water hazard fronting the green.

With his 10th shot of the 15th hole, Sergio Garcia delivered his fifth consecutive ball into the water. #themasters https://t.co/Nj020wsUeB pic.twitter.com/kWA0XBSlUK

Garcia went for the green in two, only to see his approach come up agonizingly short. He then used the Rules to his advantage to go to a good yardage for him keeping the hole and the point where the ball last crossed the hazard in mind. From there, Garcia would hit four more balls into the hazard. It was a scene straight out of Tin Cup.

Garcia’s last foray at No. 15 came during the final round of his eventual Masters win last year. He nudged the flagstick on his second shot, leaving him an eagle putt, which he made on his way to the green jacket in a playoff win over Justin Rose. He wasn’t as fortunate on Thursday.

A breakdown of Sergio Garcia’s 13 at the 15th hole yesterday – which equalled the worst score for a hole in Masters history #themasters pic.twitter.com/ClpapaaYWI

Garcia’s 13 moved him from 2-over par to 10-over par for the round. To his credit, Garcia went on to birdie the par-3 16th hole, meaning his scorecard read 5-13-2; not exactly ideal. He currently sits in a tie for 85th place, second-from-last ahead only of amateur Harry Ellis from England.

The cut rule at the Masters is the low 50 and ties or anyone within 10 shots of the lead. He will need a low round on Friday to play the weekend in his title defense.