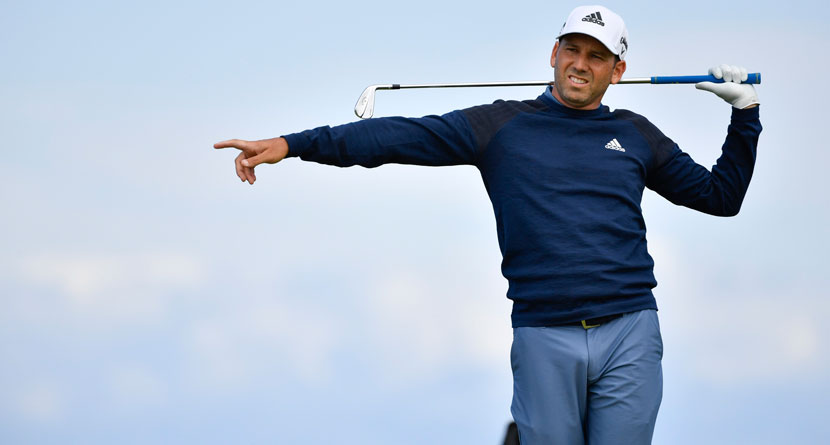 2019 has been a year to forget for Spanish superstar Sergio Garcia.

While the 2017 Masters Champion has endured a winless season, Garia has made over $2 million on the course and figures to be involved in both the European Tour’s Race to Dubai and the PGA Tour’s FedEx Cup Playoffs. However, his public relations team has been working overtime this year as Garcia has found himself embroiled in controversy on a seemingly regular basis.


Garcia’s year has already seen him disqualified from a European Tour event for losing his temper and damaging various bunkers and greens at the Saudi International as well as getting caught up in a concession controversy at the WGC-Dell Match Play with Matt Kuchar, perhaps the only other player to have a year filled with more PR nightmares.

On Tuesday, however, another incident came to light as Twitter user Ray Owens of Dublin, Ireland shared a video he took of Garcia on the 5th hole of the final round of this past week’s Open Championship.

Caught in the worst of the week’s weather, Garcia can be seen hitting a wayward drive at the drivable par-4 before throwing his driver at his brother and caddie, Victor.

Garcia doesn’t appear to have been throwing the driver at his brother in a malicious manner, but the optics surrounding the video are certainly not good.

Following his dust-up on the course in Saudi Arabia, Garcia explained that he is an emotional player, and sometimes, his emotions get the best of him.

“I feel terrible about it,” Garcia told the Associated Press after the February incident. “I’ve been thinking about it for the last week, every day. I’m an emotional player. That emotion is probably my biggest strength, but it’s also one of my biggest flaws. If I channel it the right way, it’s amazing. I think that’s why people follow me the way they do. If I channel it the wrong way, it’s too extreme. My goal is to make sure the bad gets better and the good stays.”

Garcia would go on drop his first shot of the day on the short par-4 and eventually post a 7-over par 78 to drop from a tie for 36th to fourth-from-last, T67.  He is in the field at this week’s WGC-FedEx St. Jude Invitational.