Korn Ferry Tour Pro Plays In Event While Honeymooning In Huntsville, Ala. 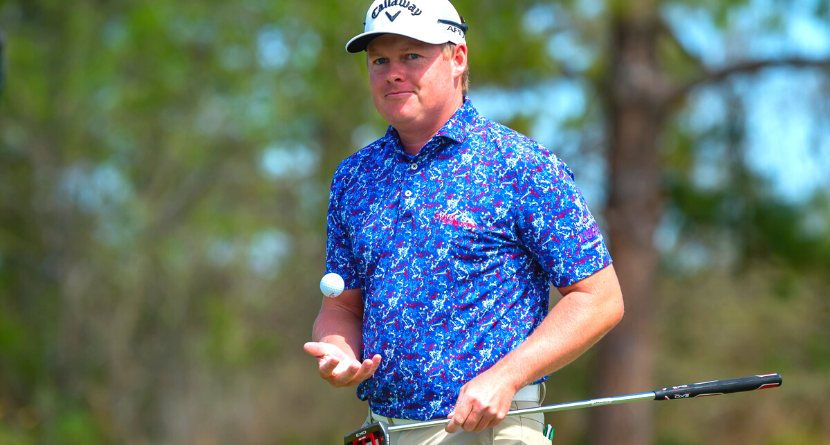 Divorce statistics are so commonly cited we probably neglect to talk about unions that are quite obviously going the distance.

But then again, you don’t hear nearly enough about how golf can provide a lasting foundation. OK, sure, love is kind of important. But also golf.

Enter Korn Ferry Tour pro Shad Tuten, who recently — are you sitting down for this one? — played in an official event while he was honeymooning in Huntsville, Ala., with his new bride Beccah Wallace.

“She’s very nice,” Tuten said of his wife in a video produced by the tour. “Huntsville, Alabama, is not exactly Italy.”

Right you are, Shad.

“Yeah, I wish I was in a spa somewhere,” Wallace added, “but it’s fine. Everything’s good.”

Freshly married ➡️ right back to the grind

A Huntsville honeymoon with the Tuten’s 👰‍♀️🤵 pic.twitter.com/wlmyRFF4t4

The happy couple was married at their Aiken, S.C., home last week and immediately headed to Alabama without pausing for so much as a beach day.

Wallace walked all 18 holes of her Tuten’s final round in the Huntsville Championship and later joked he had breezed past her without stopping for a kiss after signing for a 72 that put him in a tie for 35th. He’s fighting to keep his card after just barely earning enough money to nab a spot for 2022.

No kids yet, but Tuten and Wallace each brought a fur baby into the family. Tuten had previously rescued a dog and Wallace was a cat owner — presenting an obstacle for her highly allergic new hubby.

But you have to hold onto her, Shad. Treat her right. Trust us. She’s the real deal.