Kim Putts With 3-Wood At Masters After Damaging Putter 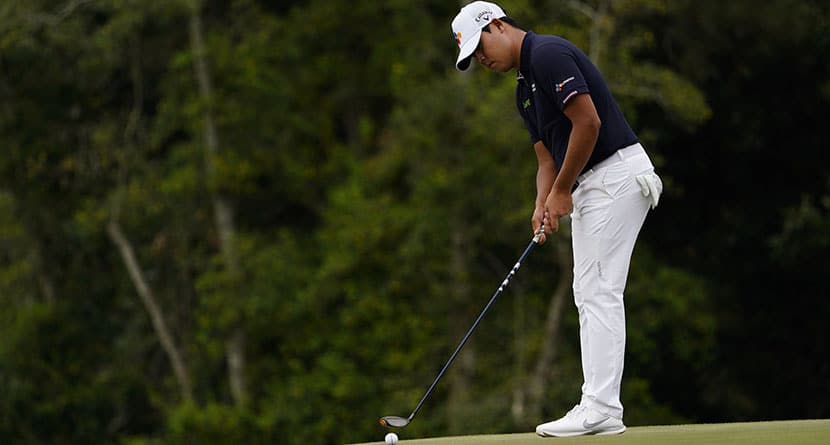 The greens at Augusta National Golf Club are as difficult as they can be frustrating, which led to one pro in contention at this week’s 85th Masters Tournament putting with a fairway wood after damaging his putter.

Si Woo Kim was 4-under par coming down the stretch on Friday afternoon at Augusta National when a three-putt bogey on No. 14 led to Kim slamming his putter into the ground on the 15th green after a poor first putt.

The shaft of his Odyssey Toulon Madison bent, rendering it unable to be played under the Rules of Golf.

Under Rule 4.1 in the rulebook, “If your conforming club is damaged during your round or while play is stopped, you may continue to make strokes with the damaged club for the rest of the round, or have your club repaired by restoring it as nearly as possible to its condition before the damage happened.

“A player is not allowed to replace a damaged club, except when it is damaged during the round by an outside influence or natural forces or by someone other than the player or his or her caddie.”

“Just frustration,” Kim said of his moment of anger after the round. “That wasn’t on purpose, but it was broken.”

Even using a 3-wood to putt the last three greens, Kim did nicely, two-putting each green to play the last four holes in even par. He two-putted from 18 feet for par on 15, missed a 15-foot birdie putt on 16 and two-putted from 30 feet on 17. On the 18th green, he missed another birdie putt to post 3-under par 69.

Kim was able to get his putter replaced for the final two rounds, shooting 74-72 to finish in a tie for 12th place, eight strokes behind Hideki Matsuyama.