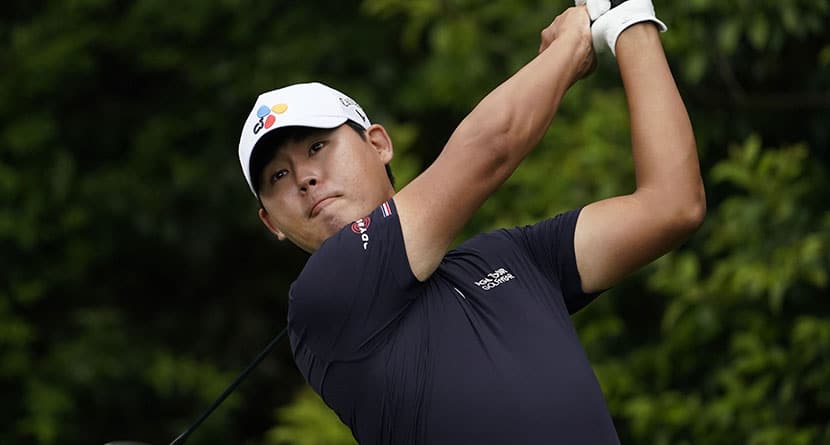 Si Woo Kim made the wrong kind of history on Sunday at the WGC-FedEx St. Jude Invitational, recording the highest score in competition at TPC Southwind and the highest-ever score on a par-3 in PGA Tour history.

Coming off a disappointing T32 in the Men’s Olympic Golf Competition last week, Kim made the 15-hour flight aboard the PGA Tour charter plane to the World Golf Championship half a world away, carding a solid opening two rounds of even-par 70-70.

On Saturday, things got away from the 26-year-old South Korean as he fired a 5-over par 75 to drop towards the bottom of the leaderboard. In the second tee time on Sunday morning, Kim presumably was in “get out of town” mode, which showed itself infamously on the island-green par-3 11th hole at TPC Southwind.

Playing just 155 yards, a tucked left pin required a precise iron shot into a green protected by water while the wind whipped up around the course. What happened next was brutal.

That marks the highest score recorded @TPCSouthwind and highest on a par 3 on TOUR (non-majors) since 1983.

Kim hit his tee ball into the water, went to the drop zone some 60 yards closer to the green and proceeded to rinse four more golf balls. When he finally found dry land, he was able to chip his 12th shot close and tap in for a 13, the highest score recorded on a par-3 on Tour (non-major) since at least 1983, when the Tour began tracking such statistics.

Falling under the “these guys are different” category, Kim birdied the next hole, a 384-yard par-4 with water all along the right side. He added three more birdies to more than offset a late double-bogey to still shoot in the 70s, carding an 8-over par 78, which was good enough for last place and a check for $35,000.

Kim declined to comment after the round, but his playing partner, Cam Davis, summed it up succinctly.

“He just kept landing it on the bank and it kicked in,” Davis said. “Maybe one too many attempts at the flag.”

It appears as if the initial sting wore off by the time Kim made his way to the airport as he and Kevin Na poked some fun at themselves for being the highest-scoring duo in PGA Tour history.

“PGA Tour highest par-3 score ever, 13 (today) by Si Woo Kim and highest par- score ever by me 16,” Na captioned the post with the hashtag #notarecordtohold. “We need John Daly on this flight for the highest par-5 score!”