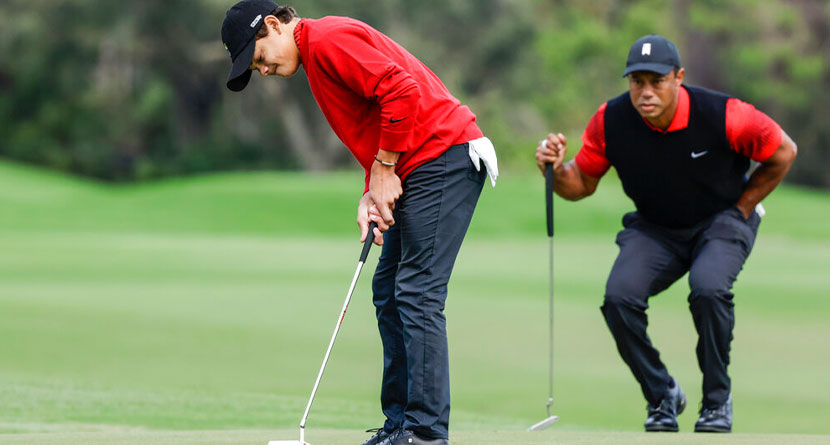 ORLANDO, Fla. (AP) — Vijay Singh and his son finally cashed in on their 16th try at the PNC Championship. For Tiger Woods, he happily settled for another great week with his son in the one tournament where no one has a bad time.

“It was great being with Dad after working so hard to get here — for me school, and him just the injury,” 13-year-old Charlie Woods said. “Being out there with a great atmosphere and everyone being out there, it was awesome.”


It felt even better for Singh, the three-time major champion who first played the PNC Championship in 2003 when his son, Qass, was 13. Singh all but sealed it with a 6-foot birdie putt for a 59 in the scramble format, becoming the first team in tournament history to post a sub-60 score in both rounds.

They finished at 26-under 118 and won by two shots over defending champions John Daly and his son and 2020 winners Justin Thomas and his father.

“This is what we wanted forever,” Qass said, now 32 and working in insurance.

“Way too long, but it’s about time,” Qass said. “So I’m thrilled. I’m so happy. This is already the best week, so this is just making it … no words can describe. It’s going to be a memory I’m going to have forever.”

Woods and his son fell out of contention with a bogey on the par-4 seventh hole when both drove into the woods. They tied for eighth in the 20-team field.

Thomas and his father, Mike, a longtime Kentucky club professional, looked to be on their way to another title until the birdies dried up on the back nine, and by then Team Singh was on its way to an overdue victory.

About the time Little John Daly rolled in an 18-foot eagle putt from off the green for a 59 to reach 24 under, Qass Singh hit the shot of the day with a hybrid on the par-5 14th to about 4 feet for eagle.

For Team Woods, their best shots were on Saturday and put them in the final group and left them hopeful of getting the Willie Park Trophy.

On Sunday, Woods hit his approach on the par-5 fifth to 15 feet, and Charlie extended his right fist in celebration upon holing the eagle putt to get within two shots of the lead. But that was as good as it got, at least for the golf.

In their third year playing this event, it was the first time Woods allowed his son to join him for interviews, and the kid delivered.

“I feel like I already knew what he was capable of, and then yesterday, that’s the best he’s ever played in a while. And that kind of shocked me a little bit,” Charlie said as his father tried to contain his laughter.

“I used to be good,” Woods replied.

Charlie and Tiger Woods react to their rounds of 59-65 at the @pncchampionship. pic.twitter.com/dN4gVpJjJz

Woods mentioned some text messages he received Saturday night after a 3-iron into the 18th hole that referred to “rolling back the clock.”

Woods has been saying he still has all the shots, it’s just a matter of walking. He was in a cart at the PGA Tour Champions-sanctioned event, still limping because of plantar fasciitis in his right foot.

But he has plenty of pop, and he let Justin Thomas know it. Woods ripped one past Thomas, the 29-year-old PGA champion, on the fifth hole. He zoomed up the fairway quickly enough to leave a note next to Thomas’ ball that said, “You’ve got mail.”

Thomas was hopeful of the final word if he and his father were to win again. Needling aside, he was impressed with what he saw on certain shots, that drive being one of them.

“I wasn’t joking yesterday when I said it: When he’s feeling well, he’s longer than I am with a driver,” Thomas said. “But I’m sure he would trade 10 yards to be able to walk every day and feeling well. But yeah, it’s very impressive. You can tell, he’s very, very strong, very fit right now. It’s just dealing with the other issues.”

Those other issues were not about to keep him away from a tournament that at this point in his career means a lot to Woods. He had to withdraw from his Hero World Challenge in the Bahamas because of his foot. He has no idea when he can return in 2023.

The Thomas clan has become an extended family. Woods’ caddie is Joe LaCava, whose son works for Charlie at this tournament.

“We had the most amazing time inside the ropes with each other,” Woods said.