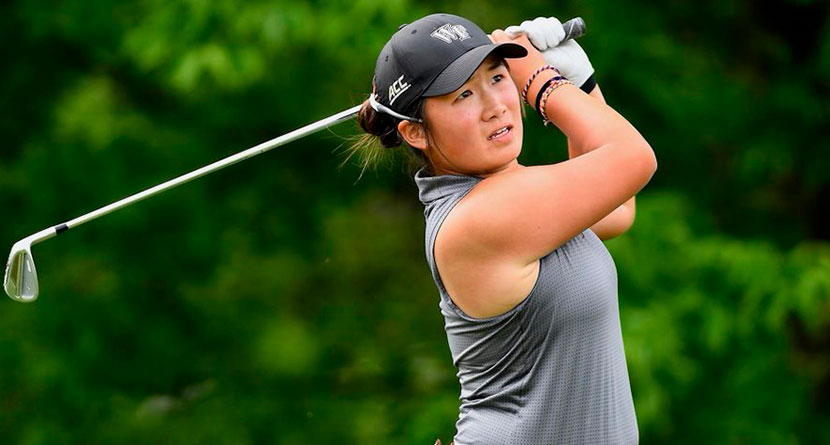 Siyun Liu, a member of the Demon Deacons women’s golf team, finds herself tied for 19th through two rounds of the 2019 PGA Tour China Series qualifying tournament at Foison Golf Club in Guangzhou, China, which would make her the first female to ever earn status on a PGA Tour-sanctioned circuit.

Halfway through the 72-hole event, Liu’s back-to-back 75s have her four spots out of 15th place, which would get her full status on the Tour, but she’s well within the top-45 that receive conditional status.


“I had a rough start and finish, but overall it was a pretty good day,” Liu said after her second round. “I made a chip-in for birdie and also made a couple good birdies after I made the turn. (On No. 2), I hit a really solid 4-iron and had a 6-footer for birdie. Then I thought I skulled my 9-iron on (No. 4) but somehow it stopped 10 feet from the hole and I made the putt, so that was a nice way to make a birdie.”

Another solid day for Siyun Liu. The @WakeWGolf senior is now in T19 and on track to earn #pgatourchina status with two days left of Q-School. ? pic.twitter.com/2I7mysA6VZ

A senior at Wake Forest, Liu planned to turn professional following her senior year and only entered the qualifying series as a way to prep for her final season in Winston-Salem.

“Honestly, it’s not as different as I thought,” Liu said. “Everyone hits it so much farther than I do, that’s for sure, and I expected that, but I’m just more playing my own game because I know that everyone else if kind of playing a different golf course than I am doing. It helps me relax.”

The PGA Tour China Series season begins in March, meaning that should Liu receive status, she could tee it up as a pro following the completion of her spring season.

Looking to make history, @WakeWGolf's Siyun Liu this week is competing in the @PGATOUR China Q-School as she is seeking to become the first female to earn her card on the men’s development tour.

“If I do end up getting some status here, then I’ll definitely come back and play,” Liu said. “If I get to play any event here, I would be so down for it.”

She’s only two solid rounds away from history.