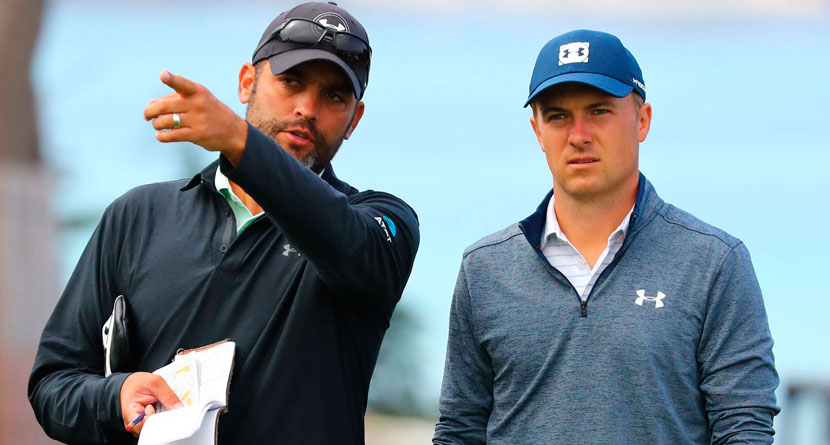 The 2015 U.S. Open winner struggled his way around the famed layout making three bogeys against two birdies to fall seven shots off the pace after 18 holes.

While the course and the USGA’s setup of it didn’t come under any fire on Thursday, the plotting of Spieth’s longtime caddie, Michael Greller, did. Playing the picturesque 8th hole at Pebble Beach, Spieth was caught on national television admonishing Greller for two consecutive shots that ended up in bad spots.

A tricky driving hole, the par-4 eighth’s fairway runs out just past 250 yards, requiring a precisely measured tee ball. Spieth hit his drive too far, finding the penalty area, and then hit his third shot over the green leaving a tough up-and-down for bogey.

Jordan Spieth just completely called out his caddie on national TV. Whether the caddie misjudged it or not, that’s a bush league move. At the end of the day, you’re the one hitting the golf ball.#USOpen pic.twitter.com/lFSYQSGrvR

“Two perfect shots, Michael,” Spieth said after hitting his third shot over the green. “You got me in the water on one and over the green on the other.”

Spieth would go on to convert the up-and-down to make bogey, and after the round he explained that the airing of grievances wasn’t so much a blame game as it was frustration boiling over.

“I may have looked like the bad guy there, but my intentions were that we should be in play if the ball is hit solidly, and I was out of play on both shots,” Spieth said. “We were talking about potentially one less (club on the second shot), and I said, ‘But isn’t it playing about 160 (yards) with a fade?’ And then he said yes.

“So we both agreed on that. It was clearly a 4-iron off the tee. At the same time, when you hit a couple of shots exactly where you want to, and the first one is in the water and the next one is dead over the green, I’m going to be frustrated that as a team we didn’t figure out how to make sure that didn’t happen.”

Speith is back at it on Friday, off the 10th tee at 11:24 a.m. ET alongside Tiger Woods and Justin Rose.