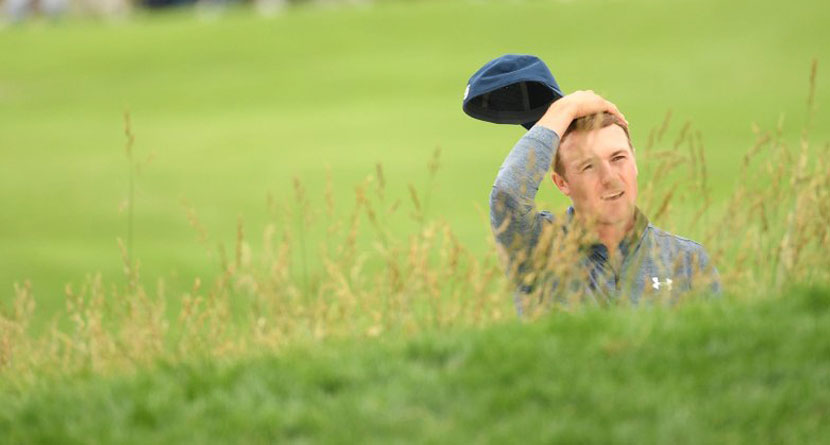 One of the best things Fox Sports does with their golf broadcasts is put microphones all over the golf course — on the tees, around the fairways, in the cups — so that fans can get a sense of what the best players in the world are feeling and saying after they play their shots.

Through two days at the U.S. Open, it’s safe to say that the abundance of microphones scattered around Pebble Beach Golf Links hasn’t done Jordan Spieth any favors as his personal commentary has resulted in a much-discussed caddie blame in the first round and a reaction to a brutally bad break during the second.

Playing the second hole at Pebble Beach, his 11th of the day, Spieth found a fairway bunker off of the right side of the 516-yard par-4. Facing a 212-yard second shot, Spieth had to clear the lip of the bunker with a long iron in hopes of minimizing the damage his off-line drive caused.

Despite barely clearing the lip, Spieth’s ball didn’t make it much farther because of a rake that was placed just outside the bunker that his ball struck.

Spieth’s ball only traveled 43 feet and got caught in the wispy grass just outside the bunker. He had to lay up from there, leaving him 162 yards and going for par. He was able to get that up-and-down for bogey to drop only one shot en route to a second-round 2-under par 69 that left him 1-under par for the tournament.

After the round, Spieth explained what happened and took the blame for not recognizing the potential obstacle in his way.

“The ball was above my feet in almost a little downslope, and I was trying to hit a 6-iron 200 yards. So in the first place it was a really, really tough shot. But I had a clean lie. Thought I could clear the lip. And when I hit it, all I heard was like the rake. And I guess it slammed into the rake and came back and kind of buried down into the tall grass,” he said. “So if it didn’t hit the rake, I don’t know if it had enough to get anywhere near the green or if it would have been way short or what, but certainly it would have been in a better position than it went to.

“And that’s on me. I just got to look at all options ahead of me. And if there’s rakes in front of the bunker, typically we pull them out. But when I was in it, I couldn’t see it. So it was kind of a weird set of events. I did well to make a 5 for sure.”

Spieth is off on Saturday in the third round alongside Nate Lashley at 3:22 p.m. ET.