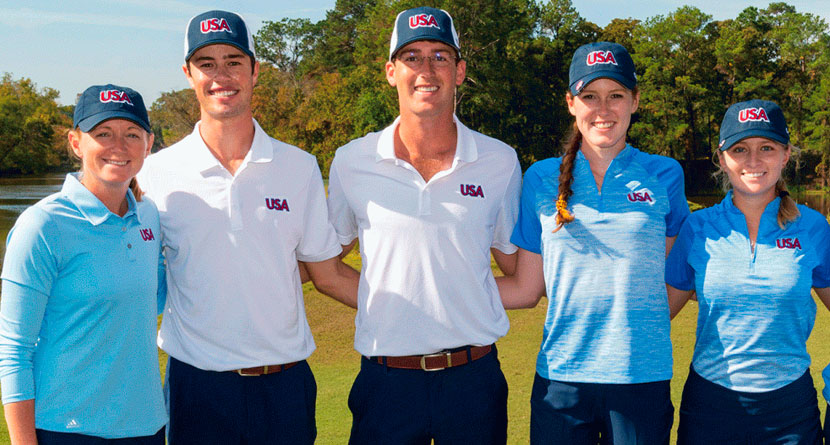 The fall appears to be the season following the Rules of Golf goes to die.

In just the last two weeks, we’ve had two relatively basic rules broken at the LPGA Tour and Korn Ferry Tour qualifying schools, one resulting in 2-shot penalties for the offenders while the other ended a pro’s quest for a Tour card prematurely. Now, we have another innocuous Rules infraction that caused a team disqualification.

The Spirit International Amateur is a world-class amateur event that features two two-person teams from 20 countries and six continents. Each country is represented by their two best men and two best women players.

Representing the U.S. women in this year’s event were Wake Forest standout Emila Migliaccio and University of Texas star Kaitlyn Papp, coached by LPGA Tour star Stacy Lewis. Kicking off on Thursday, Migliaccio and Papp fired a 6-under par 66 in the four-ball portion of the event only to find out that a scorecard error would result in their disqualification.

Another day, another rules violation. USA Women’s Team Disqualified at The Spirit International Amateur. During the 1st round, Team USA signed for an incorrect scorecard and was disqualified from the competition per Rule 23.2b of the Rules of Golf.

The Scottish team who was keeping the U.S. team’s score mistakenly gave credit for a birdie 2 on the par-3 3rd hole to Migliaccio when Papp was the one who carded the score. Lewis noticed the mistake after the round, alerted rules officials, but it was too late. Her team was DQ’d.

Under Rule 23.2b, “each score on the scorecard must be clearly identified as the score of the individual partner who made it; if this is not done, the side is disqualified.”

“Some rules in golf are harsher than others,” Lewis said, according to Golf.com. “This is overly harsh.

“It’s tough because we have to be role models in golf. We messed up and DQ is the result. It’s a harsh penalty for a small mistake which probably does not fit the crime. There were a few tears for sure.”

Lewis came across the mistake as she was tallying birdies for her players after the round.

“I noticed Kaitlyn was not credited for one of her birdies,” Lewis said. “I checked the scorecard and saw the mistake, then called the rules official to point it out. It’s pretty black and white in the Rules of Golf, but I can promise none of those girls will ever have a scoring mistake again.”

The U.S. men’s team of  U.S. Amateur champion Andy Ogletree and World No. 2 amateur Cole Hammer shot a matching first-round 6-under par 66 to trail France by three. They can still compete for the men’s title, but they won’t be eligible to win the team championship.