Stenson Lies Down For Picture With Injured Fan 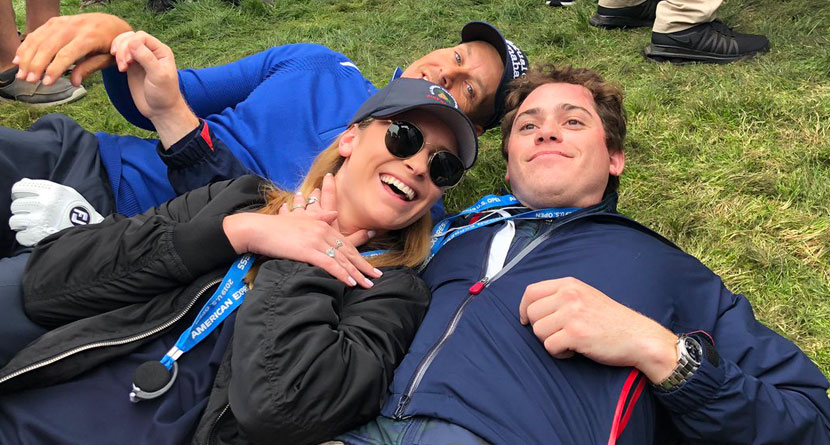 When fans step on the grounds of a professional golf tournament, the fine print on their badges releases the entity putting on the event from potential damages that may occur, which includes being struck by a golf ball.

The professionals striking the balls, however, are human beings like the rest of us, and despite them not being liable, they do feel a weight of guilt after they injure someone.

While the typical protocol for such an occurrence is an apologetic handshake and a signed golf glove or ball, Henrik Stenson went to the next level on Saturday at the U.S. Open when a wayward approach shot on the par-4 16th hole at Pebble Beach struck a fan in the forehead.

The affable Swede described in detail the shot and the aftermath, which resulted in him lying down on the ground to pose for pictures with the injured fan and his girlfriend.

“It was going to be a chippy 8-iron, but it was sitting up in the first cut,” Stenson explained. “And I hit one of those famous like rockets almost, it was a semi-shank — it wasn’t a full one; That would have been better because then it would probably have hit the trees. But it was a nice flight out to the right, shot it forward, but they can’t see anything, I can’t see where it’s going either, and clipped the guy right in the forehead.

“Luckily, I mean, you can get hit worse places. The head is never a good place to hit, but at least not the eyes or teeth or anything. So coming up there, he’s flat down. He’s got like half of a golf ball swelling coming out of his forehead.

But he’s in good spirits because he’s taking selfies of himself while he’s down on the ground. I walk up to him. I said, ‘I’m sorry.’ What else can you say? And he says, ‘Can you do me one favor? Can I take a picture with you?’ So next thing I’m down on the ground as well, taking a picture, a selfie, laying down with him and his girlfriend.”

Henrik Stenson nailed a guy in the crowd with his second shot on 16. Guy was on the ground, down for the count. Henrik laid down for a photo this bloke will never forget. Henrik Stenson – absolute character ? pic.twitter.com/1YIE6pJUW4

@henrikstenson thanks for posing for this beauty photo after striking a spectator square in the head #USOPEN2019 #usga happy everyone was ok pic.twitter.com/V8EfptLJZy

Never great to see a ball smash into a fan, but wow, @henrikstenson is a class act in mopping up the damage on 16. Even took time to lie down with the victim while receiving treatment. “Go kick arse,” the ‘victim’ told him. Awesome interaction. #fanforlife #USOpen pic.twitter.com/iefdKhyOpW

Stenson said he thought the fan may have been doing some preventative treatment with some liquid medication that could have eased the pain, but either way, he’s going to follow up with the fan in the coming days.

“It feels like he’s had maybe one or two refreshments that might have eased the pain before the strike,” Stenson said. “I don’t know if he’s got a concussion. I asked for his details so I can contact him at a later date and check up on him. I might send him more than just one golf ball next time. I might send him a couple dozen or something to try to make up for my poor shot.”

Stenson was unable to get up-and-down to save par at the 16th hole, but he recovered the dropped shot on the par-5 18th to put a bow on his third round 1-under par 70.

At 4-under par for the tournament, Stenson enters Sunday’s final round in a tie for ninth place, seven shots back of 54-hole leader Gary Woodland.

Stenson will tee off in the sixth-to-last pairing with Jon Rahm at 4:35 p.m. on Sunday.