Stenson Wins LIV Golf Event And Gets $4 Million In Debut 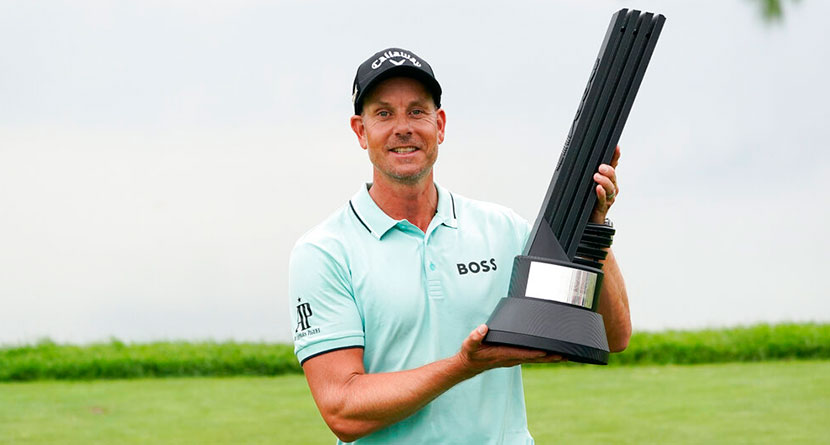 BEDMINSTER, N.J. (AP) — Henrik Stenson’s decision that cost him the European Ryder Cup captaincy paid large and immediate dividends Sunday when he won the LIV Golf Invitational at Bedminster and picked up more than $4 million for three days’ work.

Staked to a three-shot lead going into the third and final round at Trump National, Stenson opened with a 20-foot birdie putt and never led anyone closer than two shots the rest of the way.

He closed with a 2-under 69 for a two-shot victory over Matthew Wolf (64) and Dustin Johnson, who birdied the last hole for a 68.

Stenson, five years removed from beating a field of more than 20 players, picked up $4 million for winning and an additional $375,000 for his team finishing second.

The big payoff — not including a signing bonus reported to be about $50 million — comes less than two weeks after he 46-year-old Swede decided to join the Saudi-funded LIV Golf series.

Stenson had pledged full support to the European tour when he became Ryder Cup captain and March, and the tour stripped him of the job four months later when he changed his mind.

“I guess we can agree I played like a captain,” Stenson said on the LIV Golf telecast.

Asked by the LIV-paid broadcaster if he felt validated by the win, Stenson chose not to engage and replied, “It’s been a good first week.”

Stenson won the Hero World Challenge in December 2019 in the Bahamas, the holiday event hosted by Tiger Woods with a 20-man field. Before that, he won the Wyndham Championship in 2017. And while he felt pressure in the final hour, it didn’t always look like it.

Stenson poured in an 8-foot birdie putt on the 14th that gave him a three-shot lead with four holes remaining, two of them par 5s. But he took four to get down from left of the green on the par-5 15th. Two holes later, Stenson made a 10-foot putt for par to take a two-shot lead down the par 5 closing hole.

“The putt on 17 was massive to keep the cushion coming up the last,” Stenson said.

Johnson now has finished eight, fourth and tied or second in the three LIV Golf Invitationals. His team, “4 Aces,” has won the last two times, paying $750,000 to each player. In three events since Johnson reportedly received a $150 million signing fee, the two-time major champion has made over $5.2 million on the course.

Phil Mickelson shot an even-par 71, only the second time in nine rounds of LIV Golf that Mickelson has shot par or better. He finished 35th.

The LIV Golf Invitational is off for a month during the FedEx Cup playoffs on the PGA Tour, returning over Labor Day weekend about an hour west of Boston, and then two weeks later plays in the Chicago suburbs.