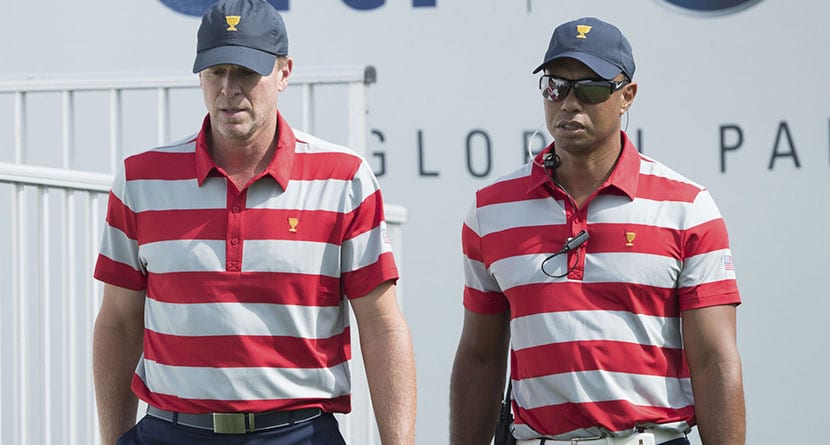 Steve Stricker rounded out his assistant captain’s last week, and earlier this week, named the six captain’s picks who will round out the United States team that will take on Europe later this month at Whistling Straits in Wisconsin.

One name, however, wasn’t brought up for either the playing or non-playing portion of the event: Tiger Woods.

Somewhat out of sight, out of mind for many golf fans these days as he continues his road to recovery from injuries sustained in his February 2021 car crash, Woods has long been an international team staple for the United States, having participated in some form or fashion since 1997 when injury hasn’t prevented him from doing so.

Woods hasn’t been seen publicly in nearly 12 weeks since photos and videos surfaced of him going to a doctor’s appointment in Los Angeles.

At the time, reports were that Woods was progressing and able to put some pressure on his injured right leg. Even as recently as last month, a People Magazine report said Woods “is in good spirits and doing well, but he has not been able to play any golf at all,” which brings us to earlier this week and the culmination of the formation of the United States Ryder Cup team.

After making his six captain’s picks, Stricker made the media rounds to discuss those on and off the team, and he was asked about Woods’ involvement and recovery during an interview with former PGA Tour players Carl Paulson and Dennis Paulson on their SiriusXM PGA Tour Radio show, the captain gave perhaps the most optimistic update golf fans have heard.

“He’s a part of this Ryder Cup family”

Steve Stricker told Dennis Paulson and Carl Paulson that Tiger is doing better and will be missed at Whistling Straits@CarlPaulsonGolf I @dennispaulson62 I @TigerWoods I @rydercup pic.twitter.com/mMdiqGN77t

“I’ve talked to Tiger a lot,” Stricker said. “He’s a part of this Ryder Cup family; he won’t be able to be a captain’s assistant this time around just because of his ongoing rehabilitation to try to get better and try to play golf again, and that is going well. He’s progressing, he’s doing well, things are moving in the right direction.