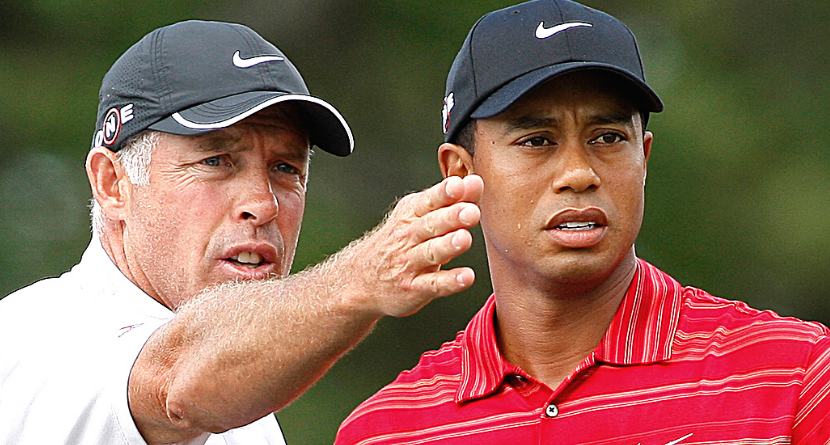 Stevie Williams’ tenure as Tiger Woods’ caddie happened to coincide with the period when the 15-time major champion was the surest bet in sports. So, naturally, it raises the question of whether Williams was ever tempted to take any action.

On the latest episode of Chasing Majors, the podcast Williams co-hosts with Evin Priest, he revealed the answer — yes, and he collected on the bet. But the piece of intel that led him to finally gamble on his boss might be more interesting than the bet itself.

Ex-caddie Steve Williams reveals the one time he ever placed a bet on Tiger Woodshttps://t.co/fRSxEGARSM

When Woods was unable to track down New Zealand’s Michael Campbell in the final round of the 2005 U.S. Open, there was one poorly executed pitch that sent Woods into the short game lab before the Open Championship at St. Andrews later that summer.

And all it took to send him there was one phrase from Williams after the round: What would Raymond Floyd have used?

Williams had caddied for Floyd from 1989-99 and continued to marvel at his inventiveness around the green. Sure enough, those six words helped Woods go on to win by five strokes at the Old Course for his second Open Championship.

“I knew that following that, [Tiger] would work so hard on that aspect of his game that he would be a certainty at St. Andrews,” Williams said. “The odds weren’t very good, but I did place a bet on him, and he, of course, won the tournament.”

In this new audio venture, Williams has opened the vault, sharing unvarnished insights from a partnership that produced 62 professional wins and all but two of Woods’ majors. Their breakup in 2011 was messy to say the least, but the two appear to be in a better place more than a decade later.