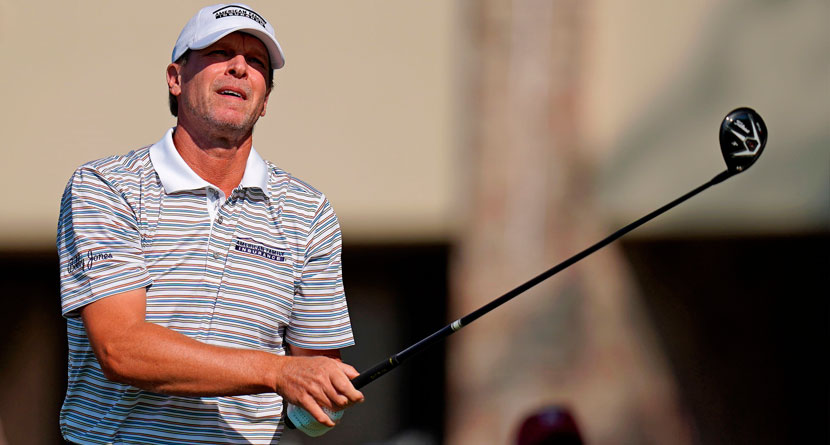 KA’UPULEHU-KONA, Hawaii (AP) — Steve Stricker competed for the first time in three months and nothing changed. He began the PGA Tour Champions year by closing with a 7-under 65 for a six-shot victory Saturday in the Mitsubishi Electric Championship at Hualalai.

Stricker seized control with a 60 in the second round for a two-shot lead, and with three birdies in four holes at the start, no one got closer the rest of the way.

“To win here, I don’t know what kind of game I had coming into this week,” Stricker said, breaking into a smile before adding, “but it was pretty good.”


He now has four PGA Tour Champions wins in his last five starts, ending last year with consecutive victories before taking off the postseason to enjoy the Wisconsin outdoors.

Stricker was challenged only briefly on a gorgeous day on the Big Island. He still was two shots ahead of hard-charging Ken Tanigawa when Stricker made a breaking 10-foot birdie putt on the 13th, and then followed that with a 45-foot eagle putt that dropped into the cup with perfect pace.

From there, it was a battle for second place that no one won.

What a week on the big island! Thank you @MEC_golf I had a blast and pumped to start off the year with a W @ChampionsTour pic.twitter.com/v92mjkFxuf

Steve Alker, the Charles Schwab Cup champion last year, closed with a 63 and earned a share of second place with Tanigawa (66), Mike Weir (66) and Darren Clarke (68), who missed an 8-foot birdie putt on the final hole.

Stricker now has 12 career wins on the PGA Tour Champions, the same number of titles he has on the regular PGA Tour.

Stricker did not start last season until May as he recovered from a health scare that included inflammation around his heard and caused him to drop 25 pounds as his white blood cell count to spike and his liver count to plunge.

He still won four times, closing out his season in October by winning three of his last four, and then sitting out the Schwab Cup playoffs during hunting season.

“I’m going to play a little more,” Stricker said. He turns 56 in February and still wants to play the occasional PGA Tour event to see how his game measures against the best.

“It’s still fun to compete with the best in the world, but I’m going to concentrate out here, playing as much as I can,” he said. “It’s a good start.”

Tanigawa and Weir both dropped shots late in the pursuit of second place. Also costing himself money was Alex Cejka, who was in second alone until trying to play from the lava rocks left of the 16th green and making double bogey. He also bogeyed the 17th and finished with a 70 to tie for sixth.