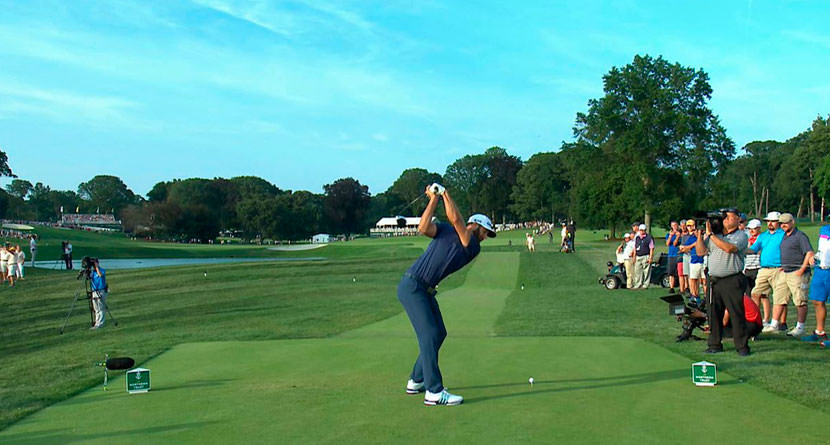 The “drive for show, putt for dough” adage has been challenged in recent years with the advent of Mark Broadie’s strokes gained metric. In fact, it’s not uncommon to see a player make up the majority of his strokes on the field average off of the green.

By and large, the importance placed on driving the ball — especially driving it long — has been magnified on Tour. However, Broadie made amends to that assumption this week when he released some interesting results on whether or not going for broke distance-wise is the most important thing golfers should be trying to accomplish.

Here’s what Broadie wrote for Golf.com.

By the time players reach the PGA Tour, is their driving distance pretty much maxed out? Tour pros are freaks of nature. While swinging a driver at 113 mph, they can make contact with the ball within a couple of millimeters of the center of the clubface—and send it screaming at 170 mph. At the same time, that ball is traveling within three degrees of the player’s intended target. Three degrees is the equivalent of the angle the second hand on your watch moves when it rotates one-half of one second.

To quantify the distance gains (or losses) of current Tour pros, I compared driving stats for the 2016 and 2017 seasons, looking at all tee shots on par-4 and par-5 holes. And to eliminate course effects—it wouldn’t be fair to, say, compare one player’s 360-yard drive at TPC Scottsdale, which is known for hard fairways and tons of roll, with another player’s 270-yard drive at a shorter course like Harbour Town—I measured each player’s driving distance relative to the field average in each round.

The biggest distance gainer from 2016 to 2017 turned out to be Kevin Chappell, who upped his driving distance versus the field by a staggering 10.2 yards. In fact, Chappell had the biggest gain of any player in the past five years. In that same five years, the second-largest gain was the 7.1-yard increase by Rickie Fowler between 2013 and 2014 seasons.

I asked Chappell’s coach, Mark Blackburn, how Chappell did it. “A perfect storm of equipment, ball and a swing change,” Blackburn replied. “He switched drivers, changed to a less ‘spinny’ ball, and lengthened his swing. More hip turn around the trail leg allowed him to load more efficiently and then explode into his lead leg.”

Added distance doesn’t necessarily lead to lower scores, if too much accuracy is sacrificed. Brace yourself for a bit of the math that explains this distance-accuracy tradeoff. In 2017, Dustin Johnson led the Tour in strokes gained driving, gaining 1.1 strokes per round versus the field with his tee shots. His drives averaged 20 yards longer than the field, with his added distance contributing a gain of one-tenth of a stroke per drive, or about 1.3-strokes over 13 drives in a round. Each missed fairway costs a lot—about one-third of a stroke—but DJ only missed one-half of a fairway more than the field per round, costing him just 0.17 strokes (one-half of one-third). Added distance gained DJ 1.3 strokes per round and reduced accuracy cost him 0.17 strokes per round, leading to a net gain of about 1.1 strokes per round.

Unfortunately for Chappell, a gain in strokes from his massive increase in distance was significantly offset by a loss in accuracy. Ultimately, season-over-season, his driving improved only by a modest 0.1 strokes per round—even after a closing flourish in which, with ever-improving accuracy, he finished the last five events of 2017 inside the top five in strokes gained driving.

The takeaway for weekend golfers? Go ahead and let it fly off the tee—but rein it in if the rock consistently ends up in a parking lot, the halfway house or the weeds.