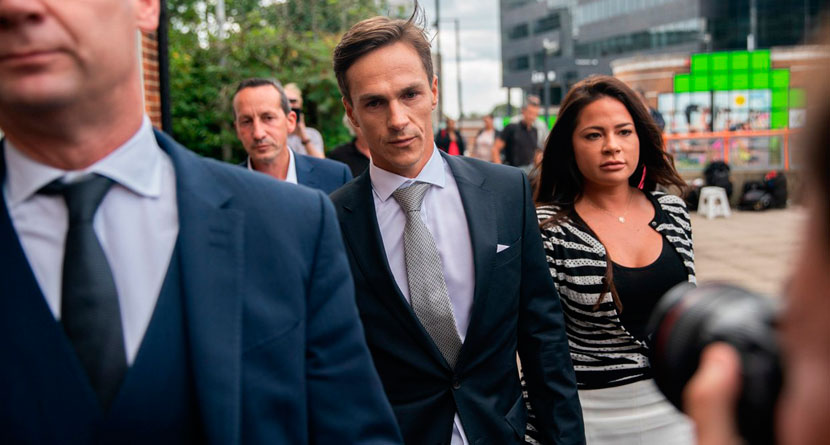 Disgraced Ryder Cupper Thorbjorn Olesen appeared at Uxbridge Magistrates Court in London on Wednesday to face charges of sexual assault, common assault and being drunk on an aircraft on his way back to England from last month’s WGC-FedEx St. Jude Invitational.

Olesen was arrested upon arriving in Heathrow airport on July 29 and later was released “under investigation” by the Metropolitan Police.

On Wednesday, Olesen pleaded not guilty to all three charges. According to bunkered.co.uk, Olesen spoke only to confirm his name, address, date of birth and nationality, as well as enter his not guilty pleas.

Ryder Cup winner @Thorbjornolesen arrives at Uxbridge Magistrates Court to face charges of sexual assault, common assault and being drunk on an aircraft.

The Dane even stopped to pose for the cameras!

According to The Sun, Olesen went on a “tirade” before molesting a woman on a British Airways flight from Nashville to London following the WGC-FedEx St. Jude Invitational. Olesen is alleged to have verbally abused fellow passengers and the flight crew before fellow Tour pro Ian Poulter calmed him down.

Prosecutor Rav Chodha argued that Olesen was part of a loud group and further claimed that the Dane grabbed a woman’s breast after kissing her neck. Olesen’s lawyer, Paul Morris, rebuttaled that Olesen had taken medicine before the flight that impacted his behavior. Olesen provided a sample, but it has not yet been analyzed.

Olesen was subsequently suspended by the European Tour on August 7th pending an investigation into his arrest and subsequent charges filed.

Thorbjørn Olesen arrives at Uxbridge Magistrates Court for charges relating to allegedly sexually assaulting a fellow passenger and urinating in the aisle on a British Airways flight #thorbjornolesen @SWNS pic.twitter.com/xCQwmmITI1

Olesen’s case will be heard by a jury at Isleworth Crown Court on September 18, consequently day before the European Tour’s flagship event, the BMW PGA Championship at nearby Wentworth, is scheduled to begin.