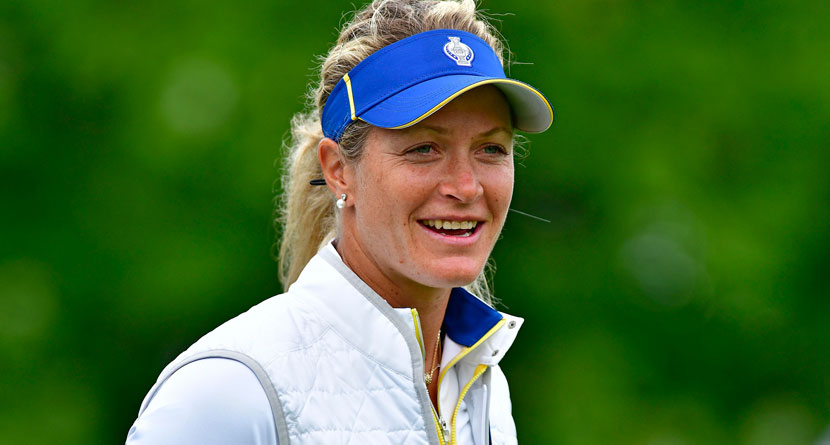 The trash talk between the United States and European Solheim Cup teams kicked off earlier this week when Danielle Kang spoke about “taking souls” and making her opponents cry in the matches.

On the eve of the first day of matches, the European team’s response came in the form of a similar promise from Norwegian Suzann Pettersen.

“(The Solheim Cup is) match play, plus you have a partner, plus you get to crush another person,” Kang said on the Golf.com Drop Zone Podcast. “So now you’re trying to take souls, you know? You’re going there to make people cry at this point, just crush the other team. That’s the fun of it. We don’t ever get to do that.”

“I think it’s just extra motivation, really, for us,” she said. “I don’t think there will be any tears on our team, just happiness.”

But Pettersen chipped in at the end, “And we’re just going to step on their necks.”

Suzann Pettersen responded to Danielle Kang’s comments about wanting to make the Euros cry, playfully saying the Euros were going to ‘step on their necks.’

If there’s someone who knows about taking American scalps in team competitions, it’s Pettersen. The 38-year-old is No. 4 on the all-time European team Solheim Cup points list with 19, and has a career record of 16-11-6.

Despite only making four official starts this season due to the birth of her first child, her record and reputation was plenty for captain Catriona Matthew to tap her for the week at Gleneagles.

“I feel like I was born for this,” Pettersen said after being selected, and American captain Juli Inkster agreed.

“It surprised me a little but only because she hadn’t played that much,” Inkster said via Scotsman.com. “But it didn’t surprise me as far as team leadership is concerned, not only in the team room but also out on the course. Catriona must like Suzann in there. It was a little bit of a surprise but she’s Suzann Pettersen and she gets up for this stuff. It’s right in her wheelhouse.”

The matches kick off on Friday and run through singles on Sunday. Wall-to-wall coverage will be available on Golf Channel.