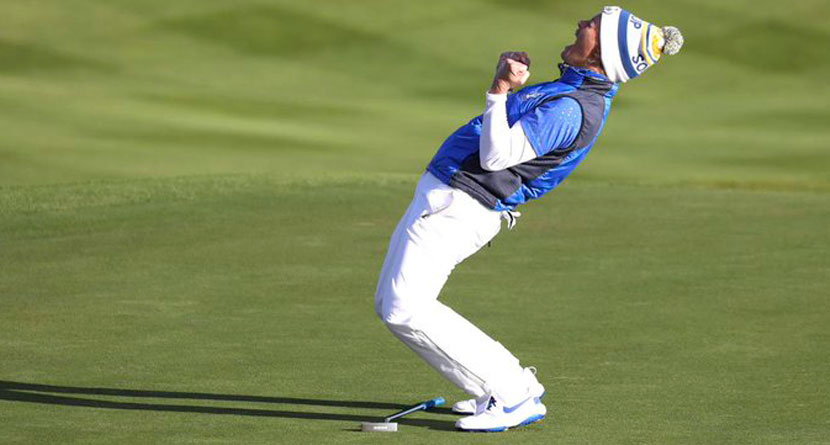 The final day of the 2019 Solheim Cup had all the ingredients for an epic finish, and while golf fans are used to seeing potentially-exhilarating final rounds fizzle without much drama, the Sunday singles did not disappoint.

The European captain Catriona Matthew backloaded her lineup with experience and charisma while sprinkling in rising stars in the first couple matches to hold off what Michelle Wie deemed to be a “shocking” lineup put out by captain Juli Inkster that fired her most experienced Solheim Cuppers in the early-to-middle matches and put too much pressure on American rookies at the end of the lineup.

Wie’s concerns came to roost as the Americans found themselves a ½ point shy of retaining the Cup with three matches to go. After Morgan Pressel lost her anchor match to Anna Nordqvist, the U.S. hopes hung on rookie Marina Alex and alternate Ally McDonald, who was called up this week when Stacy Lewis had to withdraw due to a back injury.

English sensation Bronte Law came through to earn a point for the Europeans after back-to-back wins on the 16th and 17th holes to close out McDonald, setting the stage for Suzann Pettersen, one of the most decorated European golfers in history.

Relinquishing a 2-up lead on the back nine, Pettersen hit an exquisite approach shot to the par-5 18th hole that took a peek into the hole as it spun back past it.

SHE NEARLY MADE IT‼️@suzannpettersen leaves herself a short putt on the 18th in Scotland.

With Alex failing to convert her birdie, Pettersen was left with an 8-footer to win the Solheim Cup.

Suzann Pettersen wins it on the 18th‼️

After an @allymc10 miss on 17, @suzannpettersen makes birdie on the 18th to win the Solheim Cup for Team Europe! ???? pic.twitter.com/6nYPDZ4azP

Adding to the drama of the moment, the 38-year-old Norwegian announced her retirement shortly after the putt fell, making the winning putt perhaps the last competitive shot she will strike.

“It’s a dream come true to pull this off here in Scotland, in front of these crowds, for (Matthew) here at Gleneagles. It doesn’t get any better. This is a perfect closure—the end for my Solheim career, and also a nice ‘the end’ for my professional career. I’m done. I’m closing it down tomorrow.”