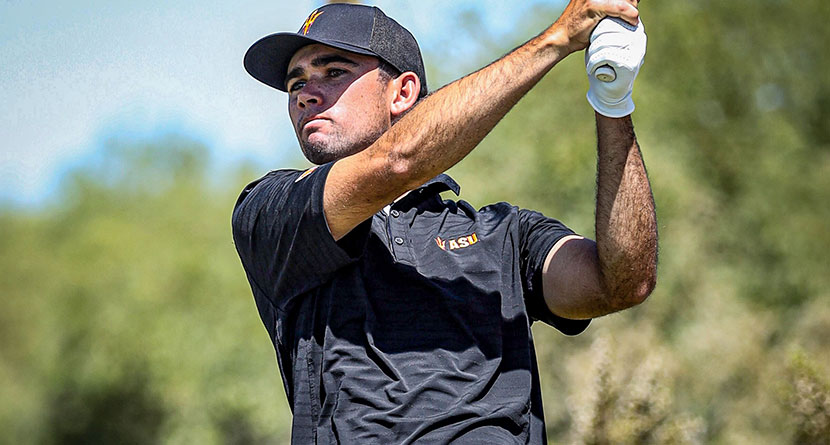 A senior at Arizona State University by way of San Diego and a SwingU Versus Collegiate Ambassador, Sisk enjoyed the best fall season of his collegiate career and has found himself jockeying for position in the race for some of amateur golf’s biggest awards.

As a byproduct of his stellar play, which was highlighted by an individual victory at the Maridoe Invitational in September, Sisk earned a sponsor’s exemption into the PGA Tour’s Houston Open.

“Who knows if you’re ever going to play in a PGA Tour event, but to secure that, to be able to play in one at least and hopefully many more, man, that’s freaking awesome,” Sisk said after sinking the winning putt.

Sisk was no stranger to the PGA Tour having attended the Farmers Insurance Open at nearby Torrey Pines during his youth, but he said the perspective flip of being inside the ropes as opposed to outside of them was his “Welcome to the Tour” moment.

“It’s pretty easy to have big eyes and be distracted by a lot of things, but I felt like I handled that pretty well, stayed focussed and didn’t let all the distractions get to me.”

He’s got the support of family and friends as he tries to make the cut on Friday. pic.twitter.com/oxb2sRnZch

Sisk wasn’t able to play the weekend, firing matching 2-over par rounds of 72 to miss the cut by three strokes.

“It was a good week overall. I thought I did a good job prepping myself for the course, but it was tough,” he said. “I did a pretty good job navigating around (Memorial Park) for the first time seeing the course and my first event on a big stage like that, so I’m not too disappointed.

“My short game didn’t really hold up on the back nine (on Friday) when I was on the cut line. I made some mistakes from the fairway, missed some greens and I started trying to hit it close to make birdies to make the cut.”

Sisk’s overarching takeaways were what you’d expect for an elite college player who doesn’t hope to make it to the Tour one day, but expects to.

“It was cool to see that I could go shot for shot with guys out there,” Sisk said. “TV makes it fun for fans to watch, but it only shows the best players at their best; 90% of the field is hitting some shots you would never think you would see out on Tour. It was kind of cool to see the reality of the whole thing.”

The experience is only making Sisk want to get back out there sooner. With a few months off around the holidays, the senior plans to spend some time working on his body and keeping his swing in check before a long and arduous spring season awaits.

While keeping his goals close to the vest, Sisk did say that he is excited about the prospects of competing for the likes of the Ben Hogan and Fred Haskins Awards while setting his sights on more victories.

Still, his long-term goal remains the same and the fire was only further fueled by a week on the PGA Tour.

“Once you get a taste of (playing on Tour), there wasn’t a second that I wanted to be anywhere else,” he said.