Versus Ambassador Nearly DQ’d After Getting Stuck In Elevator 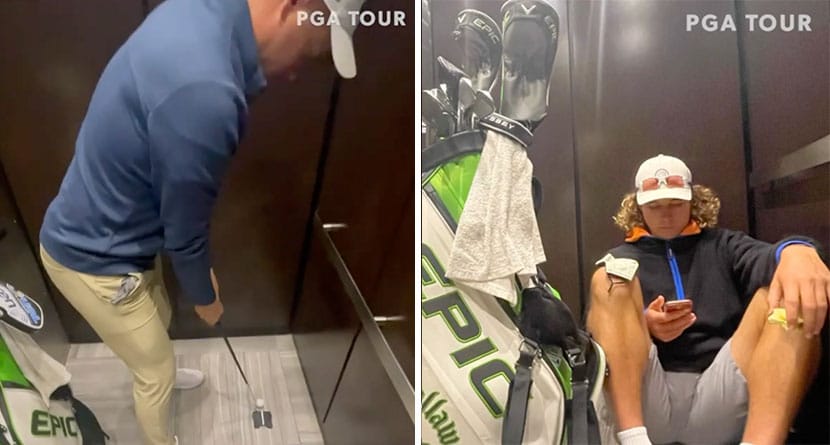 Golf is a game of overcoming adversity, and last weekend had plenty of it for SwingU Verus Ambassador Nick Voke and his caddie, Leonard Powell.

The second round of the Korn Ferry Tour’s Veritex Bank Championship at Texas Rangers Golf Club in Arlington, Texas was suspended on Friday night with Voke and Powell in the middle of the 17th fairway, meaning they would have to return early Saturday morning to complete their round.

As if the early wake-up call wasn’t enough, Voke sat squarely on the cutline, needing to play the final hole and a half in even par to make the weekend. Having woken up early and gotten in a workout, Voke and Powell hopped on the elevator of their hotel to head to the course with plenty of time to spare when the lift suddenly stopped between floors.

“It was funny for like five minutes,” Powell said. “We were just sitting there on our phones, put it on Instagram, and then it was like, ‘Ooh, this isn’t actually moving.’”

“We were standing up, we were honking everything, jamming on the door.” Voke said. “We were trying to pry the thing open and no luck.”

Stuck in the box, Voke and Powell documented their trials and tribulations on social media while they attempted to reach an elevator technician before 7 a.m. in the morning

At one point, Voke even pulled out a ball and his putter and practiced his stroke. As the minutes ticked by, conversations with the Tour didn’t ease any nerves.

“The reception wasn’t picking up any phone calls, and the technician, we got them, and they were trying to call the reception,” Powell explained. “Nick was texting the Tour like, ‘If I’m late, will anything happen?’ and he was like, “Yeah, you’re disqualified,’ so that got pretty stressful.”

After 46 minutes in between floors, a friend and a hotel worker were able to reset the elevator and free them just before 7 a.m. After a quick warm up, which the pair dubbed “the Rolls Royce” Voke thinned a wedge into the 17th green and rolled it in for birdie.

A “scrappy” par up the last hole secured a third-round tee time for the duo who would go on to shoot a 6-under par 65 on Saturday afternoon to climb the leaderboard before a 2-over par final round. Voke tied for 46th.

It’s safe to say that if the pair are in a pinch again, they’ll be taking the stairs.