Teaching Pro Teeing It Up On The LPGA Tour 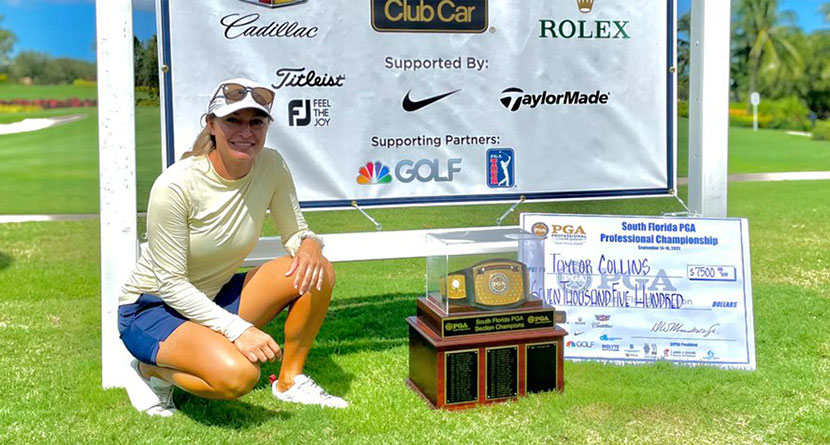 Life has a weird way of coming full circle, and it will this week on the LPGA Tour for Taylor Collins, a 32-year-old teaching pro from Fort Lauderdale.

Content with her current plot in life and on medication to keep her RH in check, Collins showed the game that led her to an 8-stroke victory at the 2011 NCAAs and a victory on Golf Channel’s long-running reality series, “The Big Break,” by becoming the first woman to win the South Florida PGA Professional Championship last September en route to being named the 2021 PGA of America’s Women’s PGA Professional Player of the Year.

She has won everything from a national title to “Big Break.” She also battles arthritis and works as a teaching pro.@BrentleyGC introduces you to Taylor Collins, who is competing this week on the LPGA. https://t.co/5Vb0FMuvwF pic.twitter.com/6ka6kSDKf6

Nine years after finishing last in the 2013 Lorena Ochoa Invitational, a perk of winning “Big Break Mexico,” Collins is playing the role of “local kid makes good” as a sponsor’s exemption at this week’s Gainbridge LPGA at Boca Rio Golf Club in Boca Raton.

Teeing it up alongside the likes of World No. 1 Nelly Korda, Inbee Park, Lydia Ko and Lexi Thompson, Collins is going in with the perspective of a woman whose changed her life goals from aspiring to be the next Annika Sorenstam to following in the footsteps of her instructor, Bob Toski.

Taylor Collins capped off her historic year by earning the 2021 Women’s PGA Professional Player of the Year award. Congratulations! pic.twitter.com/0wCtUp4HzB

With the markings on her ball this week drawn by the students she teaches, Collins said every time she addresses the ball, she’ll be reminded of how lucky she is to do what she does on a daily basis.