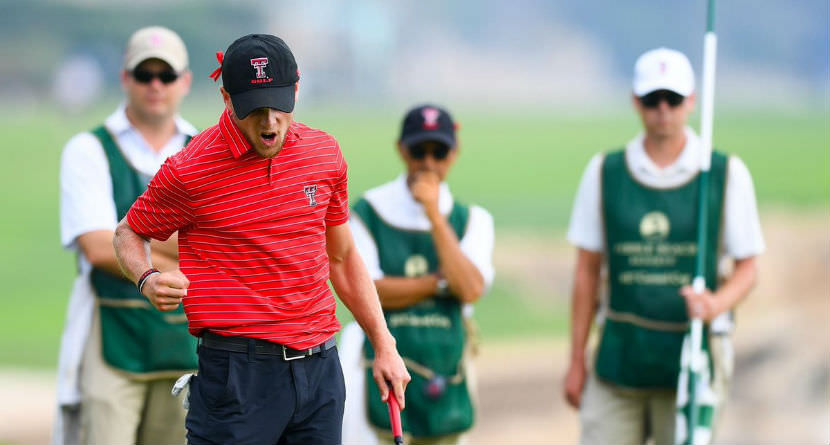 If you are going to shoot a course record, you might as well do it at Pebble Beach. During this past weekend, Texas Tech senior Hurly Long did just that at a collegiate event where he posted an 11-under 61 on the famed golf links.

It’s the lowest score recorded since Tom Kite shot 62 during 1983 Bing Crosby National Pro-Am, just a bit before Long’s time (he was born in 1995). David Duval matched Kite’s number, but nobody had ever gone lower.

Long, who is originally from Germany and started his college career at Oregon, made 10 birdies during his historic second round at the Carmel Cup, which included a 45-footer on the difficult par-3 17th and an 11-foot birdie putt on the par-5 18th, not to mention holing out for eagle on the par-5 sixth.

His only blemish was a bogey on the par-4 eighth.

Hurly Long with the clutch birdie on #18 for the course record at Pebble Beach. 61 ???? pic.twitter.com/pTlqjHbk3e

“It’s very surreal,” Long told PebbleBeach.com. “It’s taken me until now for it to kick in. Pebble Beach is just a special place. I was talking about it with my teammates. Where else in the world would you want to have the course record? Maybe Augusta National? It’s a huge, huge honor.”

Long’s three-day total of -19 was miraculously only good enough to get into a playoff against Oklahoma State’s Hayden Wood, in which Long prevailed and claimed the individual title. Win or lose, it didn’t matter, because the memory of that 61 will last a lifetime.

Hurly Long’s scorecard. What. A. Round. Ties @SFEwingIV for the lowest round in school history. 61. pic.twitter.com/m6ESdyICf8