The Backstory Of Woodland And His Biggest Fan 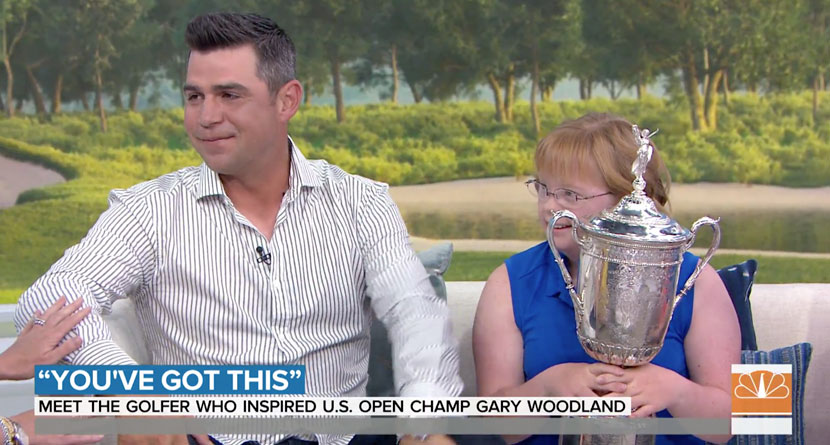 What a celebratory moment on Sunday when Gary Woodland’s putt disappeared into the 18th hole in the U.S. Open and he unleashed a fist pump that looked more like a pitcher’s fastball that rivaled any of Tiger’s in his prime. Woodland’s winning score of 13-under par at Pebble Beach actually clipped Big Cat’s by one stroke the year he won in 2000 by the record 15 shots.

Woodland almost never reacts emotionally on the golf course, we hadn’t seen this kind of emotion from him since his arms in the air celebration with Amy Bockerstette, the 20-year-old college golfer with Down syndrome whom he played the 16th hole in January at the Waste Management Phoenix Open’s Wednesday Pro-Am.

Seemingly everyone in the golf world has seen that heart-warming viral video produced excellently by the PGA Tour.

And if you’ve seen that one, you’ve likely seen last night’s Tour video of Amy going crazy in celebration as she watched Gary Woodland’s winning putt with her parents in Ponte Vedra Beach.

Amy and her parents — Joe and Jenny — celebrated at the home of Paul and Michelle Tesori, who also have a child with Down syndrome, their 5-year-old son, Isaiah.

Paul was out at Pebble Beach working for Webb Simpson and Michelle, who had put Isaiah down to bed two hours before the winning putt, sat on her couch with three people whom she just met in person that night and called it “such a gift” to share that victory and moment with the Bockerstette family.

So, how did we possibly get here?

The week Amy’s video with Gary, Matt Kuchar and Kuchar’s caddie, John Wood, went viral in the winter, Michelle received it along with messages from lots of friends.

“I’m not exaggerating,” Michelle told The Caddie Network by phone on Monday.

But she only checked the video out once she received it from Wood, a close family friend, about 10 messages into the 500.

Michelle watched it, and felt compelled to immediately find Amy’s mother, Jenny, on Facebook and reach out to a fellow parent with a special needs child.

“Listen, you don’t know me. My husband is Webb Simpson’s caddie, everybody I have ever known since birth has sent me the video of your daughter, and I just wanted to say mom-to-mom, I know there’s a lot going on right now, but Gary Woodland is genuine. What you experienced yesterday is genuine. That is real emotion from John Wood. He’s an incredible human, he has written a song for our child, Isaiah. I’m just so happy you got to experience that (moment for Amy), and as a mom, I’m so impressed with the way your daughter carries herself. Thank you for giving us this young lady into our lives.”

Jenny’s reply was immediate, even though she and her family were dealing with the loss of Joe’s father and were heading to the funeral.

“(Jenny) texted me and said, ‘you’re not going to believe this, we are coming to Palm Coast, I think it’s close to you, because Joe is being honored as ‘Father of the Year’ from Golfweek and I think we’re coming to Ponte Vedra to do some stuff for the Tour.’

“She said, ‘are you busy Father’s Day? I know that’s weird but our schedule is tied up.’ And I said, ‘we would love to celebrate Father’s Day with you guys, bring it, let’s do it,’ and we’d had Sunday’s dinner scheduled since May.”

So the magical night unfolded at the Tesori’s and the two families ordered in Mexican food and took in the amazing images of Pebble Beach and a good friend winning his first major.

“What an incredible blessing to watch a young person (Amy) who is a role model for our son, and watch her genuine love for this human being because of how Gary took the time to get to know her and love her, and he genuinely cares for her and she knows that and she feels it and she could not love him any more than she does,” Michelle said.

Joe says that Gary has been very responsive and engaging with them ever since the week of Phoenix. He even appeared in a video to honor Joe during his ‘Father of the Year’ award ceremony from Golfweek this past weekend.

For Amy, the tweet she put out returning the advice Gary told her, “You got this,” as she prepped and made her amazing par putt in Phoenix, was a no-brainer.

“I just knew he could win,” Amy told The Caddie Network over the phone Monday in the Jacksonville airport, “because he’s my best friend and I really like him.”

She was headed with her family to New York to go on the “Today” show Tuesday and eventually an NBC Nightly News segment, among dozens of media obligations.

Amy and the group knew their reaction on Gary’s winning putt would be captured on video because the Tour requested they document it — and aren’t we all glad they did.

So they ultimately set up an iPad on top of the family room TV.

“It was incredible,” Joe said of the experience. “Amy was just so excited to watch Gary win.”

Having a child with Down syndrome herself, Michelle was careful to ensure Amy felt comfortable in the lead-up to the screen time because she often has to create comfortable environments for Isaiah.

In fact, Isaiah and Amy enjoyed a few hugs through the night.

“It was more than three or four,” Joe said.

Michelle said Amy just seemed to know and almost expected that the FaceTime moment post-round would happen with Gary.

“I used your positive energy.”

“We practiced a bunch (for it), we FaceTimed with my friend Jessica Korda, we face-timed with Paul, we recorded and sent a video to Dottie Pepper, who is a dear friend, people in the golf community. She was so excited for the FaceTime with Gary and she didn’t want to miss it.”

That FaceTime moment might have been the highlight of Woodland’s press conference.

“What a great memory it will always be for us to share that historic and emotional moment with Amy, her parents and Gary,” Paul Tesori said.

“Jenny and I had a quiet moment at the end of the night and I just said ‘hey Jenny, this is amazing’ and she said, ‘Michelle, Isaiah is an incredible young man’ and I said, ‘Oh my gosh thank you so much but you guys…’” Michelle Tesori said, “and Amy was sitting with us and I said, ‘Amy I’ve got to tell you, I know you get tired of hearing this from your mom but do you know that your mom and I would pick you and Isaiah every time, every time we would choose you,’ and I’m crying and Jenny’s crying and Amy goes, ‘stop talking, Gary’s on TV,’ and she was right. Gary was on TV.”

Michelle and Isaiah enjoyed a nice breakfast this morning with the Bockerstette’s at TPC Sawgrass with some folks at the PGA Tour.

There was one last thing that Jenny said to Michelle when they were leaving the Tour offices after the breakfast. The two mothers sat in the iconic clubhouse at TPC Sawgrass and each was about to head in two completely different directions. Michelle would drive home up the road, drop off Isaiah and meet Paul back at home as he came back from Pebble, and go to work. Jenny would go with Joe and Amy to numerous interviews and media requests with the Tour, their life literally impacted even more after Woodland’s big win.

All of this has given Michelle perspective and a sense of humility of the gift she’s been given in the form of her son.

“I can’t tell you enough about what God has given us in this little boy in the backseat of our car,” Michelle said as she drove home from breakfast. “We don’t deserve him. And the people we get to meet because of him we don’t deserve to have them in our lives. And I don’t know why God trusted us with this little kid but our lives have been enriched in ways we could not ever explain and what the Tour and our golf family has done is amazing.

“I can’t believe that we had the privilege to sit with them last night and watch this, it’s a tremendous blessing.”

Friendship with the Woodlands

“Isaiah has brought so many incredible people into our lives,” Michelle said.

Two of those people are Gary and Gabby Woodland.

The trials Paul and Michelle had early with complications in Isaiah’s birth ultimately brought both close to Gary and Gabby.

The Woodlands had expected twins in 2017, a boy and a girl, and ended up sadly losing the girl and having their son Jackson, who they called their “miracle,” prematurely.

And they celebrated a huge major win yesterday with Gary thanking Amy for the positive vibes.

Amy, the college golfer, is going into her sophomore year and her father Joe said she will be playing summer scrambles in Arizona the next couple months.

Special Olympics North America is coming up soon after that and is something they certainly have on their radar.

But Sunday night is one they’ll never forget.

“She probably would have stayed up all night if  I would have let her,” Joe said, “she was that excited.”