The Clubs Taking The Champions Tour By Storm 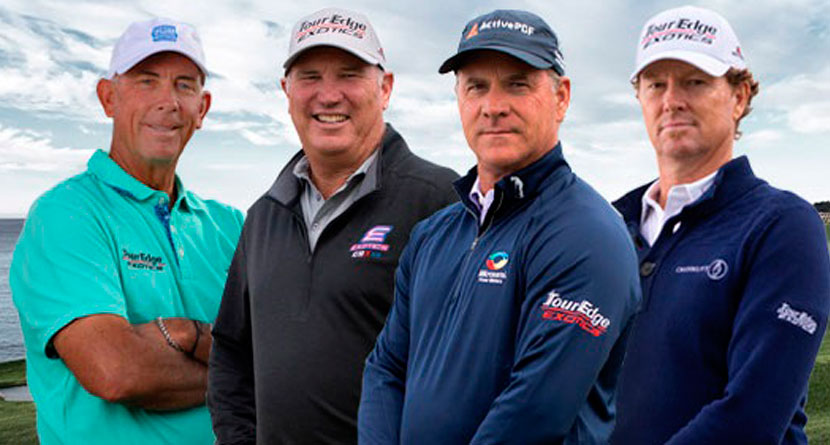 The PGA Tour Champions is no longer the part-time retirement circuit that featured the likes of Lee Trevino and Fuzzy Zoeller holding court; an injection of hungry, fit and uber-talented pros have made the 50-plus Tour one of the most competitive on the planet.

The turn-of-the-century household names that ushered in the Tiger Woods era are now playing week in and week out on the PGA Tour Champions, with one equipment provider nearly ubiquitous in many of the best players’ bags.

Tour Edge has made a strong commitment to the senior Tour and guys like Scott McCarron and Tom Lehman have taken notice. The big shift for Tour Edge has come since the company has made a more concerted effort to concentrate on the PGA Tour Champions, becoming only one of two equipment companies who set up shop at every Tour stop.

“Since we started setting up out there every week on the range and servicing the players, we have had over 60 different pros put us into play and have collected nine victories, over 45 Top-5s and over 75 Top-10s,” Tour Edge’s Vice President of Marketing, Jon Claffey, said. “Plus we have streamlined all of our PGA Tour Champions efforts with a package with Golf Channel based around and utilizing our staffers and other Champions players on the show we are presenting sponsor for PGA Tour Champions Learning Center.”

The company’s impressive rise has come about organically with the sheer performance of the Tour Edge line making its way into many professionals’ bags without any kind of equipment or ambassador deals in place.

Tour Edge was a major player on the PGA Tour after they launched their ultra-premium Exotics line. Exotics clubs earned 10 wins on the big tour in the hands of many of the top-ranked players in the world. Tour Edge clubs were in play with the world number one ranked player, a PGA Tour FedEx season winner and was in play in several Ryder Cups. 2019 marked the 10th year that Exotics was in play at The Masters.

Despite the success, Tour Edge was careful not to step on any toes by promoting their equipment being in the bags of players who were not being paid to play the equipment. That’s where the idea to make a devoted stand on the PGA Tour Champions came from.

“We have found a home out there and love servicing these players, who are still some of the best golfers in the world,” Claffey said. “Our timing was perfect and the players appreciate that we are out there to help their games. We have always had a nice tour presence with Exotics, but we were not paying the players and could not do much with it.

“Our claim to fame was that these players were choosing us for no money, no endorsement — strictly for the performance of the club. What we did on PGA Tour Champions was find the players the same way so we knew they loved the clubs then we approached them later on the see if we could work out a deal.”

Tour Edge is now consistently at the top or near the top of every PGA Tour Champions leaderboard, and the success is no fluke.

McCarron leads the money rankings on the PGA Tour Champions by more than $450,000 over the second-ranked player after a recent runner-up finish at the Senior PGA Championship.

“It has been beyond our wildest dreams just how successful we have been with this new tour program,” Claffey said. “It has helped us gain a huge buzz in the industry that provides extreme validation that is coupled with our growth of over 25% every year for the past three years.”

To learn more about Tour Edge and the offerings that are taking the golf world by storm, check out their website at TourEdge.com.