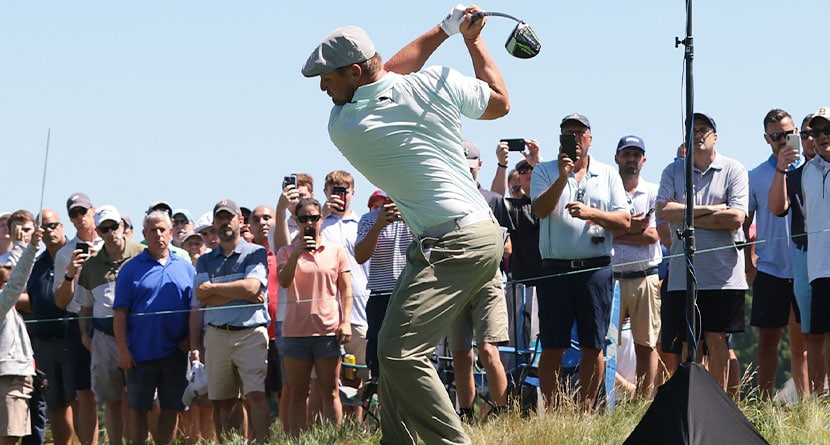 The fourth iteration of The Match, the made-for-television series that benefits a number of charitable endeavors, took place in Montana at the Reserve at Moonlight Basin on Tuesday featuring Phil Mickelson and Tom Brady facing off against Bryson DeChambeau and Aaron Rodgers.

Pitting two major champions versus two Super Bowl-winning quarterbacks was the latest version of the exhibition matches that has featured the likes of Tiger Woods, Peyton Manning, Charles Barkley and Stephen Curry in the past.

While the mic’d-up banter is always the main draw at these events, holding the event in Big Sky, Montana brought a new wrinkle into the mix: playing at 7,500 feet above sea level.

“For me, it’s just going to be hitting as many bombs as possible,” DeChambeau said ahead of The Match. “This golf course and this elevation, I’m going to be trying to hit it on many greens that are 400 yards plus.”

And he didn’t disappoint. Flipping the nines, the foursome played a drivable 392-yard par-4 12th hole early in the round that saw not only DeChambeau hit a fairway wood onto the green, but also Brady put a driver tight.

The showstopper came a few holes later, however, on the par-5 17th hole, which played as The Match’s 8th hole. At 777 yards, the hole plays 280 feet downhill from tee-to-green, meaning an absolute bomb could cover the 390-yard bunker guarding the edge of a hill that could roll out to well over 500 yards.

Mickelson, unfortunately, caught the bunker, but DeChambeau had no issue clearing it.

“You more than (covered the bunker). That is amazing,” Mickelson said as DeChambeau’s ball took flight. “Good heavens. Is that legal? Seriously?

“Some would find that inspiring, and as I walk off, I just feel defeated. Great drive.”

Not to be outdone, Rodgers smoked a drive some 438 yards right after DeChambeau from a slightly forward tee, which kicked off the newcomers comeback bid.

DeChambeau and Rodgers would go on to make an easy birdie and win the hole, the first of a 4-win run over the next five holes to take a 3-up lead with six holes to play. The lead proved even too insurmountable for Brady and Mickelson with Rodgers ending The Match in style on the 16th green.