The Part Of Dustin Johnson’s Game Every Golfer Can Clone 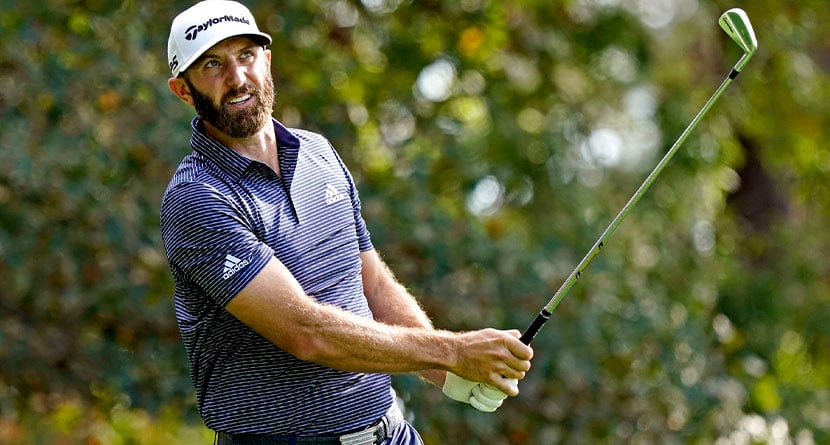 While the vast majority of Dustin Johnson’s game is completely out of reach for all of us, his focus on and attention to his pre-shot routine isn’t.

Further, in my opinion, this was an important part of his 2020 Masters success.

I was not finding anything insightful to write about after my favorite event of the season. Heck, there is no Tour ShotLink Strokes Gained data to study (never is) and basically very little drama! There was a hint of excitement as DJ entered Amen Corner with a slim 1-stroke lead. Solid pars on 11 and 12 launched him into birdies on 13, 14 and 15 for a comfortable five-shot lead.

His last bit of worry might have been the often round-wrecking par-3 12th. We all remember Jordan Spieth’s painful, wet 7 that spoiled his week or Fred Couples’ ball clinging to the bank in his win. But DJ calmly striped an 8-iron into the middle of the green. Dottie Pepper seemed more nervous than DJ about that shot.

I decided to take a look at DJ’s pre-shot routine. I became keenly interested in this often-overlooked part of the game when I had the great thrill of spending a few days in Kohler, Wisconsin with Ian Baker-Finch. During one of our lively dinners, Ian explained in great detail that his strict adherence to a pre-shot routine carried him thru his tense final 9 holes to victory in the British Open.

I was mesmerized by Ian’s description of how he visualized the shot from behind the ball and then stepped forward focusing only on the positive steps of setup and alignment, made a single waggle, and whoosh! Every routine exactly the same – no room for doubt or second-guessing.

Since then, I have written at least six articles about how a solid pre-shot routine is a key to consistency in golf and the best insulation against the chill of competition.

I measure the pre-shot routine from the time the player steps forward to address the ball until the actual strike. I generally focus on full swings as shots requiring touch – short game and putting – tend to take longer. I put my stopwatch on Phil Mickelson in his 2004 Masters win: 15 – 17 seconds; Tiger’s 2007 PGA Championship win: 9 – 11 seconds; Lucas Glover’s 2009 US Open win: 16 seconds.

DJ’s routine last weekend was efficient – more in the Tiger range or even faster as most of his full shots were less than 8.5 seconds.

The sequence of his entire routine is interesting:

I clocked most of DJ’s full shots thru 16. Interestingly, he was consistently in the 7 to 8-second range. On the difficult 12th, described above, he was exactly 8 seconds. On the Par 5 15th, he pulled his drive left forcing a lay-up from behind the trees.

There was a definite pause in his routine over that tee shot to 11 seconds. Perhaps a shade of doubt penetrated his otherwise unflappable focus?