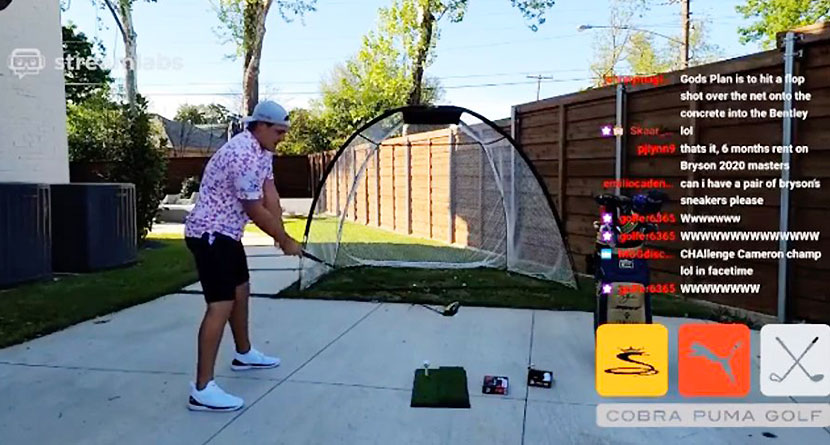 Koepka Takes Another Shot At Bryson

Koepka working on his 6 pack in front of his 4 pack pic.twitter.com/thpKUTptVM

Thoughts and feelings have a way of festering as folks are forced to stay inside for a long period of time, and it appears as if Brooks Koepka walking past his four major championship trophies on a daily basis served as a constant reminder of his pseudo-feud with Bryson DeChambeau.

While DeChambeau has taken to livestreaming during the quarantine (more on that below), Koepka didn’t miss out on an opportunity to take a jab at his fellow Tour pro and post it to social media. Naturally picking the foyer at the bottom of his stairs as a workout spot, Koepka spoke directly into the camera during an Instagram story posted on Wednesday.

“As many of you know, I do not have a six-pack. I only have four, so during this time, stuck in the house, trying to stay fit, I figured you might as well work on the core.”

Quiet scenes from Augusta as the world of golf awaits November 9 – 15, the intended dates for the 2020 Masters.

As much as these #MastersRewind broadcasts are a nice little time capsule, there’s nothing that would top an actual golf tournament taking place this week in Georgia. While we’re left to reminisce about wins from Tiger, Bubba, Jack and Adam Scott, the folks at Augusta National Golf Club let us know that was the event to have happened this week, the course would have been ready.

In a tweet sent out Monday, the official Masters Twitter account linked to a gallery on the event’s website that showed the property looking more than capable of presenting a fantastic tournament should a global pandemic not be taking place.

“This year’s Ryder Cup should not be held if fans are unable to attend the event due to the coronavirus pandemic.”
-Team Europe captain Padraig Harrington

With so much uncertainty in the world today, most major goings-on, including sporting events, are in a “wait and see” mode. That includes this fall’s Ryder Cup matches.

While professional golf has made strides in proactively returning to normal with a hopeful schedule released earlier this week, it’s still too early to tell what will be possible in the coming weeks and months. As far as the biennial matches are concerned, European captain Padraig Harrington said there is one major concern for the Ryder Cup that appears to be a make-or-break proposition for all involved: fans.

“Nobody wants to see the Ryder Cup played without the fans being there,” Harrington said on BBC Radio. “There’s no doubt that it makes the tournament so much better. I think the common consensus now is the Ryder Cup will not be played unless the fans are there.”

“Non-golfers and golfers around the world watch the Ryder Cup because of the tension that’s created by the spectators.”

Bryson Hits 203 MPH Ball Speed For A Good Cause

203 ball speed ?? if spin rate was 2000, it would fly around 360 yds. Haha. Thanks everyone who joined tonight for the stream. With my match, we are donating $1000 to @feedingamerica and are looking to do more of these to help raise even more money. @cobragolf @twitch #twitch #twitchathlete

Bryson DeChambeau has often be ridiculed for his scientific approach to the game of golf, but it’s hard to knock a guy for having a little fun all while raising money for a good cause.

On Wednesday, DeChambeau offered the challenge to his nearly-100,000 Twitter followers to join him on a livestream, donate to Feeding America and challenge him to hit any kind of shot you want. Tasked with hitting a shot over 200 MPH ball speed — for reference, the fasted PGA Tour ball speed registered last year was 198.91 MPH by Cameron Champ — DeChambeau uncorked back-to-back shots into a net that read 201 MPH and then 203 MPH.

While DeChambeau’s device said that would result in a 330-yard carry, the five-time Tour winner would assert it could have been up to 30 yards longer thanks to the relatively-low 2,000 RPM of spin.

The stream resulted in $500 worth of donations, which DeChambeau matched.