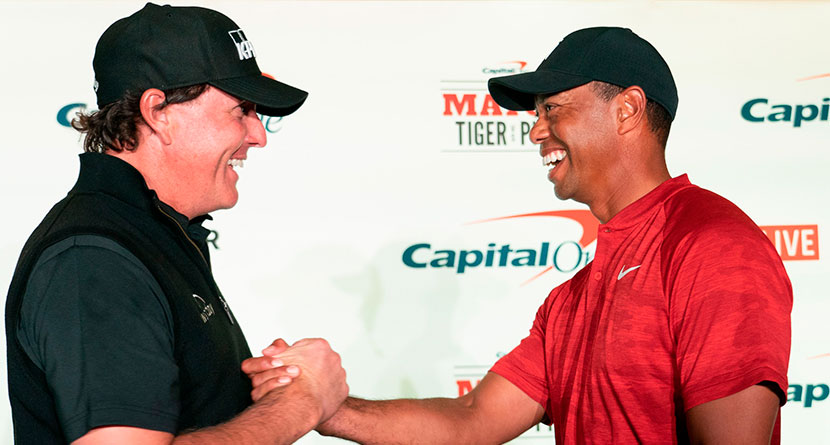 “People have been starved for content … we’re watching, like, reruns from the early 2000s,” Gov. Ron DeSantis says of his bizarre decision to classify live pro wrestling shows as an “essential service” during a deadly pandemic pic.twitter.com/rWeCOJKkh2

Florida Governor Ron DeSantis wants to see Tiger Woods and Phil Mickelson face-off in the rumored rematch of The Match, he said on Wednesday.

DeSantis who recently exempted professional sports from the state’s stay-at-home order put his support behind the match, which was reported to include new Tampa Bay Buccaneers quarterback Tom Brady and Peyton Manning.

“The one thing I do support, I think that we do need to support content, especially like sports and events,” DeSantis said. “I’d like to see Woods and Mickelson do the golf because that’s social distancing. You wouldn’t have a gallery there, you wouldn’t have crowds. But to put that on TV, I think people have been starved for content. We haven’t had a lot of new content since the middle of March.”

PGA Of America Exploring All Options For PGA Championship

“We believe that having it as a television event is worth doing regardless of whether there’s fans there or not.”

Speaking of getting sports fans more content, PGA of America CEO Seth Waugh said during an interview on Tuesday that there are multiple options on the table for the playing of a postponed PGA Championship.

“The plan is to do it as normally as possible, with fans, obviously, and have a fairly normal PGA Championship at Harding Park,” Waugh said on the radio show. “If the safest way, and/or the only way to do it is without fans, we’re fully prepared to do that. We believe that having it as a television event is worth doing regardless of whether there are fans there or not. Obviously, that’ll change the experience, but we think the world is starved for some entertainment, and particularly in sports.

“We think that, if we had to stage it with no fans, we can get 1,000ish people on the property and that if testing is available, you’d be able to do that in a safe and responsible way and get it done.”

Waugh went on to say that there can be a Plan C available to the PGA as well if San Francisco isn’t able to host.

“We’d be prepared to think about that if that became a possibility. We’re going to do everything we can to play the PGA Championship this year.”

PGA of America CEO Seth Waugh’s no-fan option got a large boost from the country’s leading infectious diseases expert and one of the faces of the United States’ fight against the coronavirus on Wendesday, Dr. Anthony Fauci.

Speaking broadly about the resumption of sports, Dr. Fauci laid out some possibilities for staging baseball and football games in particular, but there’s no reason his thoughts couldn’t be extended to major golf events (even if it seems more difficult to pull off for week-to-week Tour events).

“There’s a way of doing that,” Fauci told Snapchat’s Peter Hamby as part of a weeklong interview series. “Nobody comes to the stadium. Put [the players] in big hotels, wherever you want to play, keep them very well surveilled. … Have them tested every single week and make sure they don’t wind up infecting each other or their family, and just let them play the season out.”

Justin Thomas Wants To Be Famous

On this Masters weekend, a deep dive into a golfer who is one of the most candid, honest athletes I’ve ever met: @JustinThomas34. You’re going to be hearing from him. https://t.co/Wg2GgThQXD

ESPN.com’s Sam Borden had been spending time with and talking to Justin Thomas in the build-up to this year’s first major championship, but the story took a different turn when the coronavirus pandemic took hold in America.

What came of the story was that Justin Thomas has a lot of famous friends, and he’s actively seeking out that kind of fame, but not out of a TMZ sort of way; he wants to be one of the most recognizable golfers on the planet for his performance.

More than any athlete I’ve ever met, Thomas was the most open about his desire for fame, as well as his admiration for those around him who have it. There is no obfuscating: He wants it, and he is not afraid to say it.