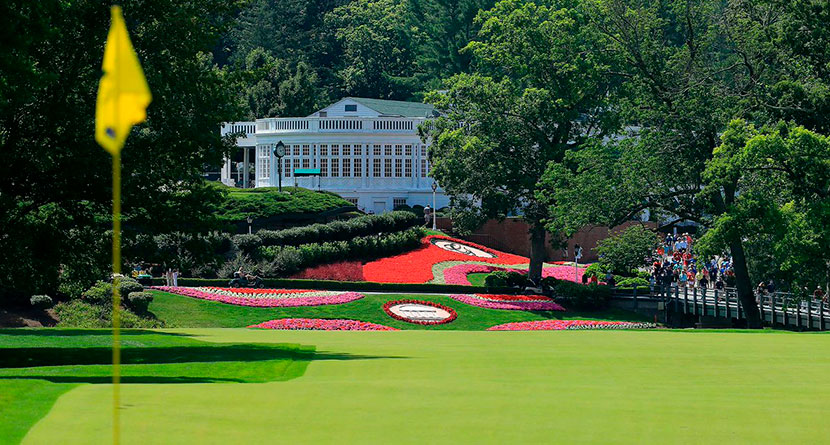 Greenbrier event permanently removed from Tour schedule via “mutual agreement.” Was under contract through 2026 but per resort release move to fall “has not served The Greenbrier as well as the event did in prior years” when it was around July 4. https://t.co/3w3AdfTP6i pic.twitter.com/dyvcPCUXql

Amid the excitement of a revamped PGA Tour schedule came the news that the Greenbrier would no longer be on the Tour’s schedule going forward as the resort and Tour parted ways mutually, ending a 10-year relationship.

“We are very grateful to Governor Jim Justice and his Greenbrier Resort for a highly successful 10 years of partnership with the PGA Tour,” Andy Pazder, the Tour’s chief tournaments and competition officer, said. “Governor Justice’s vision and leadership helped shine a light on the men and women that serve our country through the military and first responder programs he implemented through the tournament, and The Greenbrier Resort was an incredibly unique and world-class venue that our players will always remember and cherish.”

“The tournament moving to the fall has not served The Greenbrier as well as the event did in prior years when it was hosted over the July 4th week,” a statement from the resort said. “With kids being back in school, the attractiveness for sponsors and the attendance for the fans dropped significantly.”

While competitive golf seems to be right around the corner for PGA Tour pros, a former winner didn’t want to wait until June to get back into the swing of things.

PGA Tour veteran Alex Cejka won Arrowhead Classic on the Outlaw Tour by shooting a final-round 64 to win by two strokes. It was his second start in two weeks on the mini-tour.

The BMW International Open and the Open de France have been cancelled, while the Aberdeen Standard Investments Scottish Open, a Rolex Series event, has been postponed due to the continuing threat posed by the spread of Coronavirus (COVID-19).

Less than 24 hours after the PGA Tour announced its proposed schedule for a resumption of play, the European Tour canceled or postponed events in to mid-July.

“The decision to cancel the BMW International Open, which has been a cornerstone of the European Tour calendar for three decades, and the Open de France, one of our most historic national Opens was made in consultation with our long-term partner BMW and the French Golf Federation respectively with public health and well-being the absolute priority for all of us,” European Tour Chief Executive Keith Pelley said. “Both Germany and France have been significantly impacted by Coronavirus, and our thoughts go out to everyone affected in both countries, as well as elsewhere around the world.

“In consultation with Aberdeen Standard Investments, VisitScotland and Rolex, we have also decided to postpone the Aberdeen Standard Investments Scottish Open, which is part of our prestigious Rolex Series. Discussions about the possibility of rescheduling this event will continue as we look at a variety of different scenarios for our schedule for when it is safe and permitted to resume playing. We will only announce details of these plans when we have clarity on the global situation.”

The story of the home run derby inside the Woods household with @JustinThomas34, @TigerWoods and Charlie. ? pic.twitter.com/tYz485N9bO

What happens when you go to Tiger Woods’ house and play ping pong with him and his son? You get bored, and start playing home run derby inside the house.

Justin Thomas explains in the video above.

“I guess it’s a common thing in the Woods house,” Thomas said.