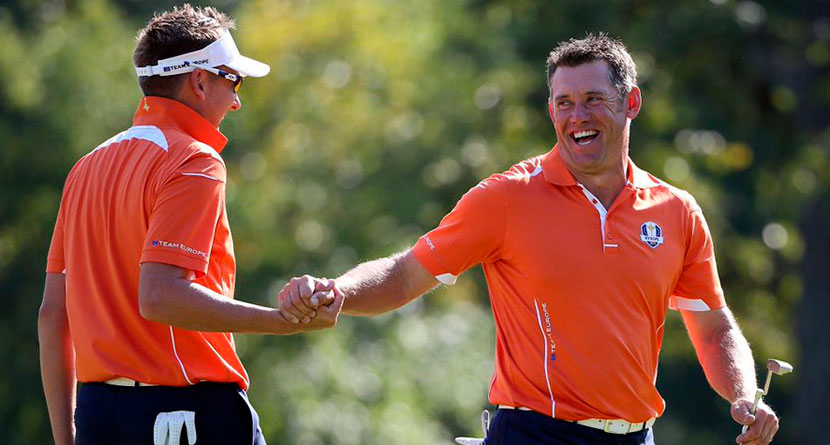 Westwood, Poulter Jab Each Other Over Workouts

When you have friends like Ian Poulter or Lee Westwood, there’s no need for enemies. The two Englishmen had some fun over the weekend on social media poking fun at each others physiques and work-out prowess, much to the enjoyment of their hoards of followers.

It started with Westwood posting a shirtless video of himself working out.

Poulter popped in the comments to take a jab at Westwood before posting his own version of Westy’s workout.

Westwood wouldn’t let the opportunity pass without taking another shot at his Ryder Cup teammate, telling him to return the weights he was using to Poulter’s son.

Hollins Gets The Call To The Hall

Odds are you don’t know the Marion Hollins story. Don’t worry, I was late to the party too. But WOW. We should all know her name. Getting into the @GolfHallofFame is a big step toward that. https://t.co/P6jLxTSF2O

Tiger Woods may be the biggest name going into the World Golf Hall of Fame in 2021, but he’ll be enshrined alongside Marion Hollins, someone who had a hand in building one of the courses at which Woods has had some of his most memorable moments.

Hollins, who won the U.S. Women’s Amateur in 1921, is best known for her work in golf course architecture and development. Hollins had a hand in the development and design of such courses as Augusta National Golf Club, Cypress Point and Pasatiempo.

The Utah Am Will Happen This Year

“If it’s the week after Christmas in St. George where we’re running this thing, we’ll do it.”

You probably don’t know it, but the Utah State Amateur is “the oldest continuous tournament in the world.” Neither world wars, health emerge or economic depressions have kept the event from being staged every year since 1899, and the coronavirus won’t be the reason it won’t be played for the first time in 121 years.

“I refuse to go down as the executive director that allowed us to lose the moniker of the longest continuously held tournament in the world,” Jake Miller, the executive director of the Utah Golf Association, told a Utah TV station earlier this month. “So if it’s the week after Christmas in St. George where we’re running this thing, we’ll do it.”

Typically, the Utah Golf Association holds 11 qualifiers to fill out the 288-player field, but that may not be realistic this year.

“The State Am may not look like it normally looks like in 2020,” Miller said, “but we will be playing golf and somebody will hoist the trophy.”

Schwab Completes His Own Challenge

Today’s objective: Make it to the top without the ball dropping on the ground… and finish in style! ? pic.twitter.com/2xn4NoTZpp

What good is a hike if you can’t enjoy the view? European Tour pro Matthias Schwab could hardly take his eye off a bouncing ball last week as he scaled a mountain trail in Rohrmoos, Austria.

Even though it’s safe to assume there was some creative editing taking place, the live footage in and of itself was pretty impressive either way.