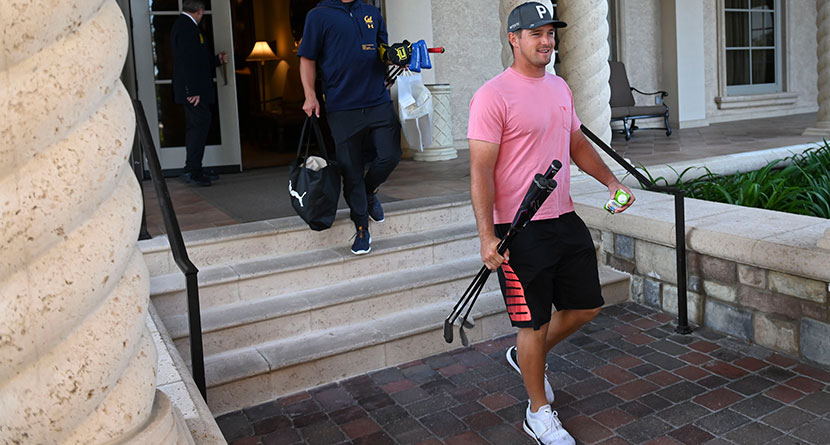 Bryson DeChambeau’s weight gain regiment is moving full steam ahead, and if he’s to be believed on a recent livestream, he’s nowhere near finished yet. Since announcing he was undergoing a body transformation at the end of the 2019 season, DeChambeau has packed on more than 40 pounds as of April 20.

“I’m going to come back next year and look like a different person,” he said in September. “You’re going to see some pretty big changes in my body, which is going to be a good thing. Going to be hitting it a lot further.”

DeChambeau shared a photo of his scale that read nearly 239 pounds, saying his “base weight” is currently 235, up 40 pounds from 195 when his experiment began.

“I’ve upped my size tremendously,” DeChambeau said. “Forearms strength, shoulder strength has gotten crazy strong. I’ve been working hard on that. Leg strength is still there. Look at all the long drivers on Tour, they are animals. Does it mean I’m going to lose all my touch and feel? No, it does not one bit … I’ll adjust if it’s too much for some reason.”

So far, it’s paid off on the course in limited quantities. DeChambeau leads the PGA Tour in driving distance, averaging 321 off the tee, and his results over the first few months of 2020 were trending in the right direction, finishing inside the top-5 in each of his last three starts.

Ryder Cup Could Be Played Without Fans

PGA’s Seth Waugh on a fan-less Ryder Cup (via @WFAN660): “We have begun to talk about whether you could create some virtual fan experience, and we’re going to try to be as creative as we can. It’s (still) to be determined, frankly, whether you could hold it without fans or not.”

Like with much of the information we’re learning in real-time during the coronavirus pandemic, thoughts and stances are shifting almost daily. That has been the case in the golf world as well with schedules shuffling, tournaments being postponed and canceled and general uncertainty reigning.

Now, one of the biggest events of the year, the Ryder Cup, is considering something previously thought to be a deal-breaker: playing without fans.

“It’s hard to imagine one without fans,” PGA of America CEO Seth Waugh said during an appearance on a WFAN radio show Sunday. “We have begun to talk about whether you could create some virtual fan experience, and we’re going to try to be as creative as we can. It’s [still] to be determined, frankly, whether you could hold it without fans or not.”

As with restarts in any sport, an assumption of wide-spread testing is expected to be required. Waugh estimated even without fans, roughly 1,000 to 1,500 people would need to be on-site to make the event happen. He also said they will know more when and if the PGA Tour is able to restart as planned in mid-June.

“All of them are better with fans,” he said, “and I’m not suggesting it doesn’t change the experience, but in the Ryder Cup it’s particularly important. We’ll be very careful about that. It’s a very unique thing.”

There were a lot of great moments from Sunday’s first two episodes of “The Last Dance,” ESPN’s 10-episode documentary that follows around the 1997-98 Chicago Bulls, and Michael Jordan in particular.

Jordan’s affinity for golf was evident in the first two episodes as well as footage of a young MJ hitting the links prior to Game 2 of the 1985-86 NBA Playoffs against the Boston Celtics. Down 1-0 in the series, Jordan played golf with Celtics guard Danny Ainge on the off day between games, and Jordan lost again, fueling his fire.

Michael Jordan is the most relatable golfer of all time. pic.twitter.com/gplGy3iwhK

“I took a few bucks off of Michael that day, and we’re talking trash to each other,” Ainge said. “That might have been a mistake.”

“We get done, we get in the car, we drop Danny off first,” Rare Air author Mark Vancil recalled. “And Michael says, ‘Hey, tell your boy DJ I got something for him tomorrow.’”

“DJ” was Dennis Johnson, the Celtics defensive stopper. Jordan famously went off for 63 points — the most prolific scoring performance of his career — in a 135-131 loss, inspired somewhat by a loss on the golf course.

Finchem To Be Inducted Into Hall Of Fame

He left the game better than he found it.

Former PGA Tour commissioner Tim Finchem will be the third member of the World Golf Hall of Fame Class of 2021, the institution announced on Monday, joining Tiger Woods and Marion Hollins as the other inductees.

“It is the greatest honor to be elected to join golf’s most legendary players and contributors in the World Golf Hall of Fame,” Finchem said in a release. “This is a truly humbling moment, for which I am most grateful, and I look forward to celebrating with my family and friends throughout the game of golf and the many people who made this possible for me. I am especially proud to stand alongside one of the world’s all-time greats, Tiger Woods, in the Class of 2021 and look forward to what will be an exciting year ahead.”

Finchem’s 22-year tenure was marked by massive gains in prize money, the creation of the Presidents Cup, the World Golf Championships and the FedEx Cup as well as being instrumental in golf’s return to the Olympics in 2016.