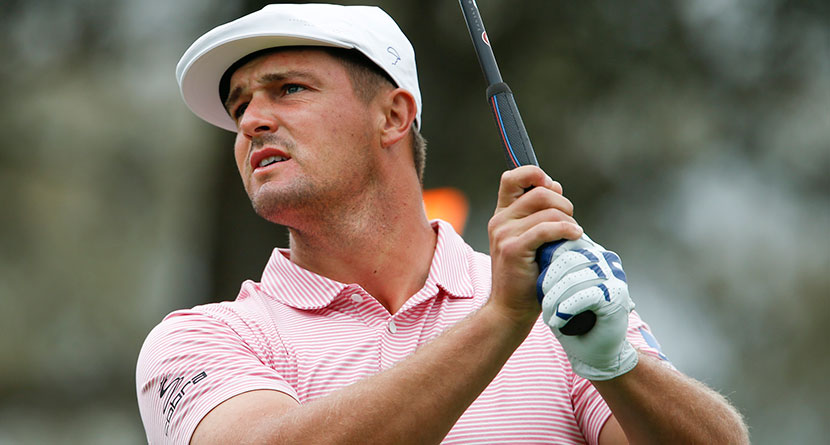 Bryson DeChambeau’s goal to “add mass” has gone very well as described in this space earlier this week, but there were more nuggets uncovered during a recent stream that are very Bryson.

In a clip, which was pulled by Bryson or a member of his team and posted on his Twitch channel, DeChambeau spoke about the possibility of hitting a 48-inch driver. For comparison’s sake, most off-the-rack drivers run in the 45-inch range, while the average Tour player is playing a big stick that’s actually an inch or two shorter. Bryson’s going the other way, closer to the long-drive route.

“I’d definitely use a 48-inch driver if I could control it,” DeChambeau said. “I’d generate so much more speed, but it’d need to be light enough, though. We’re going to mess with that. Trust me, if the USGA allows me to go to 48 inches with the driver — and I hit it just as straight as my 45.5-inch driver — why not? Why not?”

NCAA Golf Could Be On The Chopping Block

Is college golf on the chopping block?

Division I college golf programs in the non-Power 5 conferences could be subject to cuts should the NCAA approve a temporary relief waiver.

In a letter to NCAA president Mark Emmert, commissioners from the Group of 5 and 22 other non-Power 5 Division I conferences requested emergency legislative relief to reduce membership requirements, which includes a stipulation on the number of sports a school must sponsor, which currently sits at 16.

It’s been well documented that the majority of college sports lose money from a bottom-line perspective and with the uncertainty of the coronavirus still hanging over the fall sports schedule, golf and other low grossing sports could see their teams affected.

“Nobody wants to cut sports,” Mountain West commissioner Craig Thompson told ESPN. “There’s the conspiracy theorists who say, ‘Oh, this is the opportunity they’ve been looking for. They’ve been trying to cut that.’ I don’t believe that’s really the case. If you have to sponsor 16 sports to maintain FBS Division I status, could that number be 14? That’s not the intent, though. The intent is to at least sponsor what we’re sponsoring now, but maybe not at the same levels required by the NCAA legislation.”

A letter from the Golf Coaches Association of America wrote a rebuttal of sorts to the NCAA as well.

“If this waiver passes, it would mean the potential for fewer teams, fewer scholarships and fewer opportunities for student athletes competing in Olympic and non-revenue producing sports,” wrote Gregg Grost, CEO of the GCAA, in an email sent to golf coaches and GolfChannel.com. “The GCAA strongly opposes this drastic measure and has signed off on a letter with other coaches associations that was sent to NCAA President Mark Emmert today.

The economic impact of the COVID-19 pandemic places a lasting burden on both higher education and intercollegiate athletics alike, but slashing opportunities for students is not the solution.”

Add Fleetwood To ‘No Fans, No Ryder Cup’ Camp

McIlroy and Fleetwood, and probably every other human on the planet, aren’t on board with a fan-less Ryder Cup. https://t.co/DL8uVioFcf

The PGA of America’s hand is being forced more and more these days, and not only by the current complications that COVID-19 is presenting. Rory McIlroy spoke in very plain terms on Tuesday that a Ryder Cup without fans “is not a Ryder Cup.”

And he got some support from his fellow European Ryder Cupper Tommy Fleetwood on Wednesday.

“It doesn’t seem right,” Fleetwood said in an interview with the Golf Digest podcast. “It sounds strange to have a Ryder Cup [without fans], which I think so much of what makes that event what it is … you talk about guys that have played the Ryder Cup and they talk about not being able to put the ball on the tee, or the feeling that they have.

“Is the pressure the same (without fans)? I don’t think it can be if nobody is there. That’s what makes it. Sixty, Seventy thousand people watching and there are only four groups on the golf course. It’s amazing, and it massively makes the Ryder Cup what it is.”

Davis Love III and his wife, Robin, continue to discover what was lost in the fire that destroyed their Georgia home last month, and what was safe elsewhere. https://t.co/lXItsvHRXw pic.twitter.com/f2SIhgF4mt

Whenever you see peeks inside the homes of Tour pros, it’s incredible the amount of golf gear and memorabilia they accumulate over the years, especially so when you’re a player like Davis Love III who has enjoyed a Hall of Fame career.

Unfortunately for Love, his family home burned down in a May 27 blaze, destroying everything. Spending time between a new house on St. Simons Island and their farm in Georgia, Love III told GolfChannel.com that some of his memorabilia survived the fire by virtue of being spread out over different places.

“We went to our farm a few nights ago to spend the night and Robin was like, ‘There’s the picture of you with George W. Bush catching a fish,’” Love said “We didn’t lose everything.”

Love’s Hall of Fame locker has some keepsakes as well.

“I’ve been e-mailing with (Hall of Fame vice president) Brodie Waters, ‘Are you sure you got the big Wanamaker Trophy, not the little one? You have the real ’12 Ryder Cup, not the little ’12 Ryder Cup?’” Love said. “The amount of stuff you accumulate over 30 years on Tour is really incredible, that’s why we are so lucky.

“I keep hoping to find a letter from Arnold (Palmer). It’s the little things you miss.”