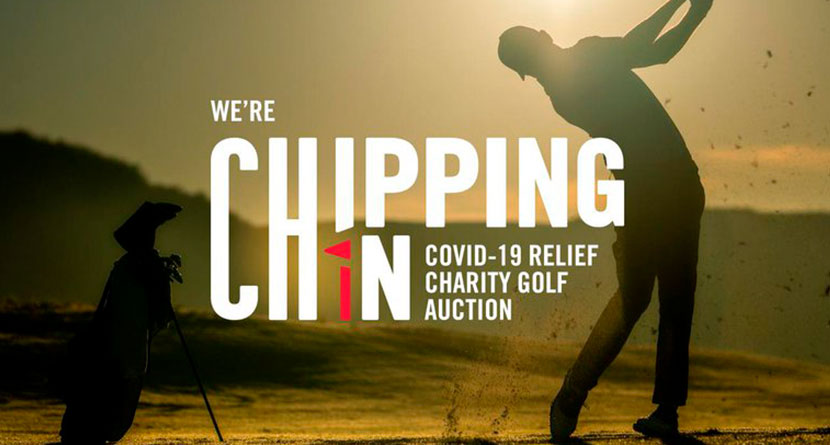 The golf world has been active in supporting various causes during the coronavirus outbreak, and that trend continued on Thursday as Titleist announced their Chipping In: COVID-19 Relief Charity Golf Auction, a combined effort between Titleist, Footjoy, Vokey Design and Scotty Cameron.

The auction benefits the CDP COVID-19 Response Fund, The United Way and the Golf Emergency Relief Fund and runs through April 30. Check out the auction site here.

Tiger Practicing At Home, Getting Antsy

Tiger is ready to go. https://t.co/IJzUmhWchX

One of the biggest things PGA Tour pros have lamented during the COVID-19 shutdown is that despite some ridiculous setups and avenues available for practicing, without an end date or goal in sight, they’ve had trouble getting in productive practice.

With the PGA Tour announcing its reimagined schedule, which included three of the four major championships, Tiger Woods now has something start working towards, even if it is more than a month away.

PGA of America CEO Seth Waugh reported to Golf.com’s Michael Bamberger that despite having one of the most ridiculous backyard practice facilities in the world, he’s still chomping at the bit to get back out on the course.

“We’ve texted a little bit,” Waugh said. “He’s doing fine. He’s in his compound. Medalist is still open, so he can play there a little bit. He has a world-class practice facility on his property, so he’s there a lot. He’s hanging out with his kids. I think it’s been good timing for him, for his body. Right? This has been a little bit of a break, a chance to regenerate. But he’s getting antsy.”

Luckily for Woods, his end date is earlier than most other big-name pros with “The Match: Champions for Charity” coming in May.

One of golf’s most interesting characters is 22-year-old South Korean Sungjae Im. Without a home base in the United States — he travels from hotel to hotel and plays in more events than any other top player on the PGA Tour — Im was in a difficult spot when the coronavirus pandemic hit.

Luckily, he, his parents and instructor have been able to shack up with a family friend in Tampa where he’s played some golf and even discovered a new hobby.

“It’s fortunate the golf courses here have not been shut down during this crisis,” Im told the Associated Press in an email. “(My coach and I) have a great relationship-friendship, and it’s been nice having him here. Spent some quality time together on and off the golf course,” Im said. “I have been playing golf almost every day, so I’ll be ready once a date is set.”

He’s even adopted a new hobby.

“I have never fished in my life before, but I went several times during the break and it was pretty exciting,” Im said. “Caught some catfish! Next time I would like to try deep-sea fishing and catch something bigger!”

What We’re Reading (And Watching)
The Man, the Myth, the Gambler: A Collection of Michael Jordan Betting Stories

With episodes three and four of ESPN’s documentary “The Last Dance” airing over the weekend, there has been plenty of Michael Jordan content emerging as of late.

Considering Jordan’s reputation and penchant for making things interesting, The Action Network’s Matt Moore compiled some of the best MJ gambling stories, which often took place on the golf course.

A sampling via Sir Charles: