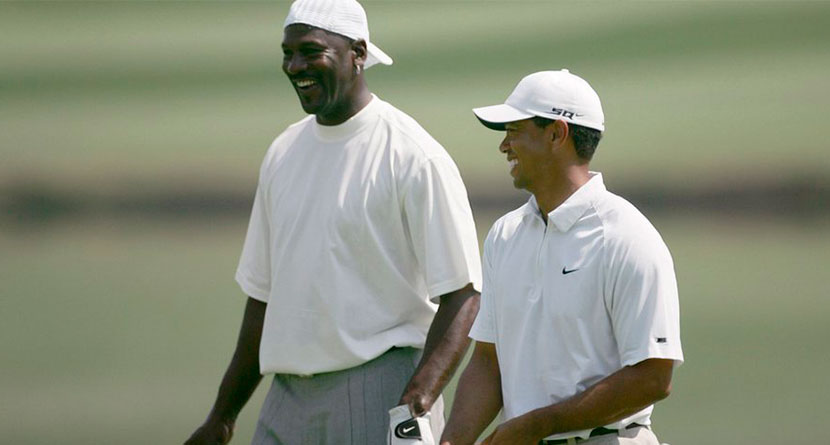 Tiger Compares His Competitiveness To Jordan

The story of @TigerWoods hanging out with Michael Jordan during the 1997 @NBA playoffs.

ESPN’s 30 for 30 documentary, “The Last Dance,” has become one of the most captivating things to happen in sports during the COVID-19 pandemic, and given Michael Jordan’s proclivity for golf, there are some obvious crossovers.

During an interview with GOLFTV, Tiger Woods was asked about his relationship with Jordan and he told a story about how he hung out with Jordan and the Bulls during the 1997-98 season that inspired the documentary.

“They were playing the Knicks in the (Eastern Conference Finals),” Woods said in the interview. “I went up there and hung out with him for a few days. It was neat to be a part of the mindset—I can relate to that. I can relate to the intensity.”

“I would say 1A, 1B, myself and Michael,”  Woods said. “He’s more, I think, outwardly competitive than I am. But I have my tendencies to be a little competitive at times.”

The NCAA says it “will not” consider blanket waiver for reducing sports programs.

Good news for college golfers and other athletes in non-revenue-generating sports: the NCAA announced on Friday that they would not be considering a blanket waiver of limiting the number of sports an institution must sponsor to remain eligible.

“Higher education is facing unique challenges, and the Division I leadership believes it’s appropriate to examine areas in which rules can be relaxed or amended to provide flexibility for schools and conferences,” said council chair M. Grace Calhoun, athletics director at Penn. “We will prioritize student-athlete well-being and opportunities balanced with reducing costs associated with administering college sports, but a blanket waiver of sport sponsorship requirements is not in keeping with our values and will not be considered.”

While it’s a small victory, sports such as golf are not out of the woods yet, as Texas Tech men’s coach Greg Sands, who is also president of the Golf Coaches Association of America, told GolfChannel.com.

“I think it’s a small win for the Olympic sports to know that there’s not going to be a blanket situation to where possibly sports could get cut,” Sands said. “I know the door’s still open for individual waivers to be processed, so I don’t think we’re out of the woods necessarily.”

Another week, another win for Alex Cejka.

The 49-year-old veteran carded a hole-in-one and added an eagle as part of a final-round rally Sunday to capture the 54-hole Parker Open in Parker, Ariz. https://t.co/yOYi65lZ2x pic.twitter.com/ReHlCUfx51

Down six shots with six holes remaining in the 54-hole Parker Open in Parker, Arizona, Cejka made an ace and an eagle to play the final six holes in 6-under par to force a playoff with Ed Olson, which Cejka won on the first extra hole.

“Somehow he heard about the event,” tournament founder Steve Benton said. “In fact, he said he was thinking about coming back next year to defend. I know $7,000 is nothing compared to the money he has played for in the past, but he said he and his family had a really good time.”

U.S. Girls’ Junior and U.S. Junior Amateur Championships have been canceled for 2020.

In addition, the opening of entries for six additional amateur championships will be delayed.

“Our primary focus when making determinations around championships continues to be the safety and well-being of everyone involved,” said John Bodenhamer, senior managing director of Championships for the USGA. “While we are incredibly disappointed to have to make the decision to cancel our two junior championships, we know it is the right one.”