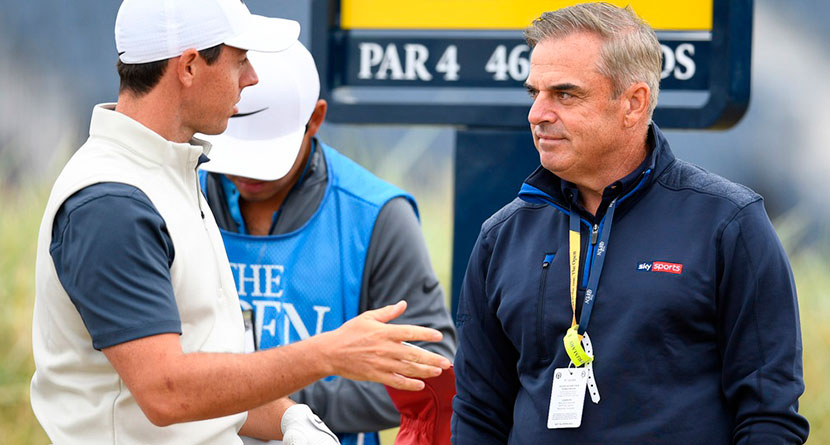 ?️ “Having open minds could well protect the sport and some of its historic events from spiralling into crisis.”@McGinleyGolf looks at a number of new measures that we may need to support to protect the game…?

Former Ryder Cup captain Paul McGinley took a pragmatic and long-term look at the near future look of sports around the world, especially the biennial Ryder Cup matches set to take place in September.

Given recent comments by players and administrators about the possibility of a fan-less event, the blowback, in McGinley’s view, is short-sighted.

“This is a moment for all stakeholders in golf to continue to collaborate, communicate and support each other,” McGinley wrote for Sky Sports. “We have no similar experience in modern times to look back on and to learn from. Having open minds could well protect the sport and some of its historic events from spiraling into crisis.

“There needs to be collaborative sharing of thinking and a sense of camaraderie. We all want our sports to be back to what they were and, in time, they will be. But in the meantime let us embrace the “new norm” for what it is – an unwanted and unwelcome intruder that we will face together and ultimately control.

“In the meantime, let us make the most of whatever degree of playing participation and spectatorship we are able to achieve.”

Thanks for hanging back to tend the pin, @TigerWoods. Almost needed you.? https://t.co/zPxLlgBtyu

Back when professional golf tournaments and their pro-ams were still a thing, Rory McIlroy hit an awesome shot from 190 yards during the Genesis Invitational as the tournament host — who just so happened to be Tiger Woods — stood and tended to the flag.

How did that come about? Rory explained on a recent podcast.

“(Tiger) was sort of messing around and saw that I was waiting in the fairway so he tended the flagstick for me from 190,” McIlroy said on the Rory & Carson Podcast. “It gave me this incentive that I really wanted to hit a good shot here – a little under pressure – and I hit a 6-iron and he actually had to move his left foot out of the way of the golf ball.

“I don’t care what happens this week, that is the best moment. I was so happy.”

In his dreams, a seriously ill Sydney man, Ross Campbell, has a round of golf regularly with the 2013 Masters champion Adam Scott. So Mr Campbell was delighted to find Scott on the other end of the phone.https://t.co/ZBebilsZFi

Adam Scott has a lot going for him, but 76-year-old Ross Campbell doesn’t.

Campbell suffers from seven brain tumors, according to a story in the Sydney Morning Herald, and the confusion caused by the disease has led the man to believe that Scott is his best friend. Despite being in a wheelchair, Campbell believes that he and Scott play regular rounds of golf together and share tips and beers at the 19th hole.

Campbell’s daughter made contact with Scott during a trip he had made to Queensland, and Scott called Campbell, and although that was no surprise to him — they’re best friends after all — it warmed the hearts of Campbell’s friends and family.

Adam readily agreed to phone Ross and, although initially surprised by Ross’s immediate familiarity, quickly settled in for a chat.

“You didn’t need me for the game yesterday?” asked Ross, a question which Adam gently deflected.

Pam says: “I’m standing in the background crying and happy as they chatted away. They talked golf and Ross mentioned that he gets very wobbly in the legs when he goes out to play.

“He’s in a wheelchair and can hardly stand up but Adam must have sensed this and said he gets wobbly in his legs, too.”

With the phone call over, Pam thought she would spin out the joy, saying, “What about Adam Scott ringing you?”

Ross answered in his dismissive way: “What are you talking about? Of course Adam would call. He wants a game. He’s here at Riverside Oaks.”

Northeast Am Canceled For First Time Ever

Sad to announce the 2020 @NortheastAm has been canceled due to Covid-19 pandemic. You can view official media release on our website. Stay safe everyone!

One of the country’s most prestigious amateur events, the Northeast Amateur, scheduled to be played June 24-27 at Wannamoisett Country Club just outside of Providence, Rhode Island was canceled for the first time in its 58-year history.

The event, which draws top amateurs from around the world, was ranked fourth in the United States and ninth in world amateur golf events by strength of field according to Scratch Players World Event Ranking.

“Our priority is to protect the health and safety of the invitees, officials, volunteers, staff and membership of Wannamoisett Country Club,” said tournament chairman Ben Tuthill. “We care deeply about amateur golf and hosting one of the top events of the year, and make this decision with a heavy heart. Many different considerations went into this decision and we must act responsibly during this pandemic.