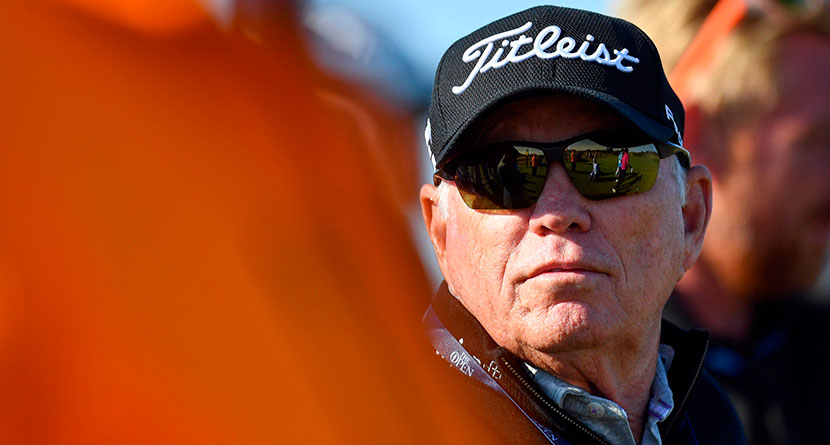 “[Brandel Chamblee] got about as much chance giving golf lessons and helping players get better as I got at playing a PGA Tour event and winning tournaments.”

Even in a quarantine, Golf Channel analyst Brandel Chamblee can ruffle feathers across the golf world.

Giving a Q&A interview to Golfweek a few weeks ago, Chamblee — among other things — said he could fix Jordan Spieth’s issues in “two seconds.” One of Chamblee’s first and loudest critics was Harmon’s son, Claude III, who coaches Brooks Koepka, among others.

Speaking with his son last week, Butch Harmon had some advice for Chamblee.

“If it was that simple, Brandel, you should go fix it,” Harmon said on an Instagram live video with his son. “It’s pretty easy. If you feel it takes two minutes to fix him, you’d be a fool not to call him up on the phone and say, ‘Hey, look, why don’t you come by and let me help you?’

“Look, I like Brandel. Brandel and I have been friends forever. I think he does a great job on TV. But the difference is, Brandel is not an instructor. Brandel was a Tour player. And he wasn’t that great of Tour player anyway. He was a middle-of-the-pack kind of guy. He’s got a beautiful golf swing, but he wasn’t the greatest player.

“He’s got about as much chance giving golf lessons and helping players get better as I got at playing a PGA Tour event and winning tournaments,” he said. “Because I’m not a good golfer and I guarantee you he’s not a very good instructor.”

Scottie Scheffler just chipped in for birdie at 18 to shoot 6-under 66 and take clubhouse lead. Birdied last 3 holes.

Most of the Tour competitors in the Maridoe Samaritan Fund Invitational, a 54-hole event benefitting the Carrollton, Texas, club’s caddies, felt like they were in college again, hoofing around the course with their stand bags on their backs and working out yardage by themselves.

It should come as no surprise, then, that PGA Tour rookie Scottie Scheffler, only a few years removed from college golf, took the first-round lead with a 6-under par 66 making eight birdies on the day, including a chip-in on the last.

“I’ve been inside my house a lot lately, so it was just nice getting outside and playing competitive golf again,” Scheffler said.

Collegians Austin Eckroat of Oklahoma State and Quade Cummins of Oklahoma trail Scheffler by two shots after the first round. Former Alabama standout Davis Riley and Mark Reppe are tied for fourth at 3-under par with Tour player, Harry Higgs, and Texas freshman Travis Vick tied for sixth place.

Padraig Harrington: Ryder Cup may have to take one for the team and play without fanshttps://t.co/NOFWLQCHI9

Given recent comments by ⁦@mcginleygolf⁩ and now this, finances are clearly critical.

Despite his personal feelings, it appears as if Padraig Harrington has come around to the reality that he may be captaining Europe at Whistling Straits in September without fans.

Speaking to The Times London, Harrington admitted some of the broader views of the impact the Ryder Cup can have are weighing on the decision to play the matches regardless of the current state of affairs as it pertains to large gatherings of sports fans.

“If those PGA Tour events go well behind closed doors, then we are far more likely to see a Ryder Cup as normal,” Harrington said. “It massively increases the odds of being with fans, because by September we may have moved on. I assume there is no chance of a vaccine (by September), so we’re looking at how well-contained it is by then, and how treatable it is.”

“WHO” really did a lot for us didn’t they? Grow up reporters, I did a video for fun to put some laughter in us through this tough time! Y’all are a joke!

One word that could sum up John Daly is unapologetic, which is exactly how he felt about the backlash he’s received over a 50-second video he made earlier this month in conjunction with the Trump Organization in which he touted the benefits of drinking vodka during the quarantine.

“Shame we can’t have any humor in this country or this world anymore, you know, without somebody busting your you know what,” Daly said on Golf.com’s Subpar podcast hosted by former PGA Tour pro Colt Knost and Drew Stoltz. “I didn’t mean to hurt anybody’s feelings. Hell, I was just doing it for fun, just try to get some laughs in the tough times we’re going through.

“We all need some (fun) right now, we all need a sense of humor right now. We pray for the people who have fallen and pray for this virus to get over. I didn’t mean any harm by it.”