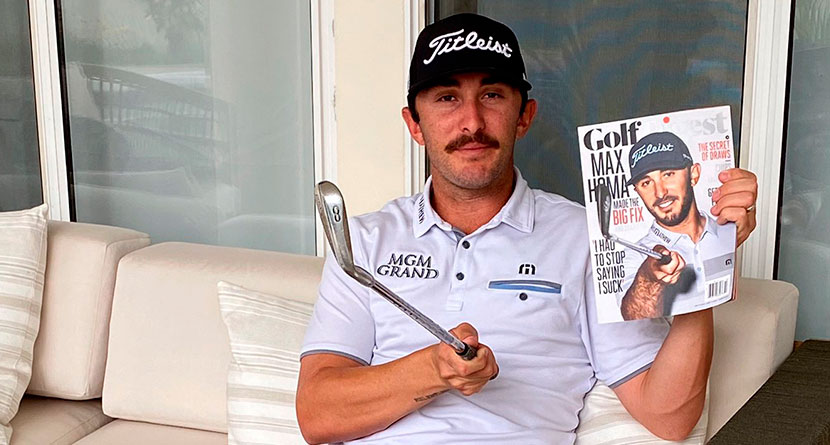 From the new episode of Get A Grip. Let’s be people who help people pic.twitter.com/Q6JRcABS11

Max Homa, winner of the 2019 Wells Fargo Championship, is new to the podcast game. Six episodes into “Get a Grip with Max Homa & Shane Bacon,” the coronavirus pandemic hit the fan and the Players Championship was canceled after one round.

Homa and Bacon, a Fox Sports play-by-play man, have recorded four episodes in the past two weeks while both hunker down in their respective homes, and the idea to donate to charity offered a caveat that was a light-hearted jab at one of Homa’s physical attributes: his excessively hairy arms and legs.

A general punchline on the podcast, Homa offered to shave his arms and legs if a listener donated $2,500 to a local foodbank. The listeners did that and then some, raising over $40,000, which resulted in Homa reimaging his Golf Digest cover with silky-smooth arms.

Max Homa agreed to shave his arms if a podcast listener donated $2,500 for local food banks.

Listen to the Get a Grip podcast here.

Here’s some sad news: the Masters was supposed to take place next week. ESPN is trying to do their part to fill the void by airing some of the most memorable Masters final rounds of the last few decades in the place of their normal Masters broadcasts.

“ESPN will salute the Masters Tournament with encore presentations of the final rounds of two of Tiger Woods’ five wins, Jack Nicklaus’ stunning victory in 1986 and other classic editions of the iconic event at Augusta National Golf Club over three days beginning Wednesday, April 8,” ESPN PR said in a statement. “The airdates for the Masters salute coincide with the dates ESPN would have been televising the Masters Par 3 Contest and the first two rounds of this year’s event before it was postponed due to the coronavirus outbreak.”

Aside from Tiger’s wins in 1997 and 2019 and Nicklaus’ historic win in 1986, Bubba Watson’s playoff victory in 2012 and Adam Scotts win in 2013 will also be aired. Additionally, ESPN+ will present an on-demand collection of official Masters Films, including highlights of nearly every Masters event since 1960.

On Thursday in this space, Golf Digest reported that the 2020 Open Championship would not take place, but less than 12 hours later the R&A contradicted that report.

“We are continuing to work through our options for The Open this year, including postponement,” Martin Slumbers, Chief Executive of The R&A, said. “Due to a range of external factors, that process is taking some time to resolve. We are well aware of the importance of being able to give clear guidance to fans, players and everyone involved and are working to resolve this as soon as we can.

“We will give a further update as soon as we are in a position to do so and thank everyone for their support and understanding in this challenging situation.”

The Golf Digest reported that insurance payments were a big consideration for cancellation versus postponement, but it doesn’t appear the R&A is ready to take that step just yet.

Statement on the City of Toronto decision to pull all city permits as a COVID-19 precaution. pic.twitter.com/r691rZVpKZ

In the coronavirus era, permissions and restrictions change hourly, and as we continue to move deeper into 2020 and project a return to (somewhat) normal, local government restrictions could have wide-ranging effects on professional sports.

The city of Toronto has taken steps to cancel all major city events and event permits through June 30, which puts the June 11-14 RBC Canadian Open in an interesting position.

“We appreciate the factors that led to this decision, in particular that all city resources are being directed to support our communities during this unprecedented health crisis,” the statement read. “Together with the PGA Tour, we are assessing this recent development along with other challenges posed by COVID-19 to determine the best course of action for the RBC Canadian Open. We will make further announcements in the coming week.”

The Canadian Open is the longest-running non-major event on the PGA Tour, and as of now, the third event still scheduled to occur during its original dates.