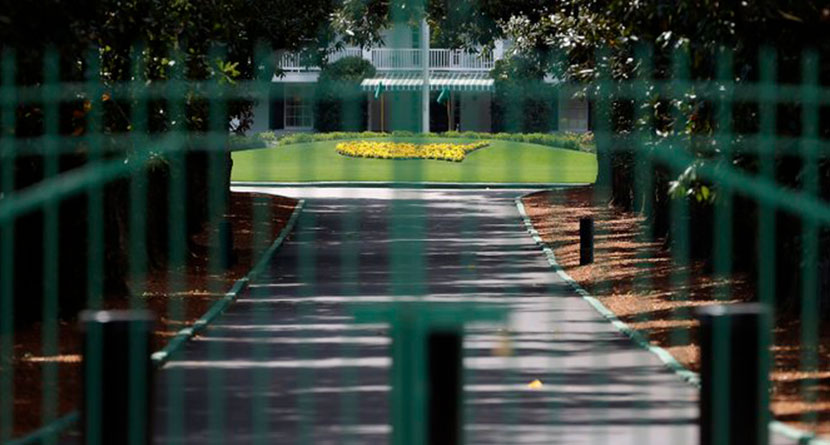 It’s Supposed To Be Masters Week

Strictly golf-speaking, this may be the week that tries golf fans’ resolve the most.

In a normal year, the Masters would be taking place this week in Augusta, Georgia, bringing not only every golf fan on the planet into the fold, but mainstream sports fans as well. Freelance music composer John Houston summed up our feelings nicely with his “sad version” of Dave Loggins’ “Augusta,” the official theme song of Masters week.

With the Masters postponed until further notice — although there has been plenty of speculation as to when it could take place later this year — we’re left with locked gates at Augusta National Golf Club and empty pictures of the typically-packed businesses of Washington Road.

Today was supposed to be the practice round for ANWA.

Instead, the Augusta National gates are locked, the parking areas are empty and the surrounding restaurants in take-out-only mode.
(Kevin C. Cox/Getty Images) pic.twitter.com/RdmJbg94AJ

A talk with Donald Trump.

In some more positive news, President Donald Trump held a conference call with some of the most powerful people in professional sports on Saturday, including PGA Tour and LPGA Tour commissioners Jay Monahan and Mike Whan.

The major headline to come out of the call was that President Trump said he believes the NFL season should start on time in September, according to ESPN.com’s Adam Schefter and Adrian Wojnarowski. Others on the call included NFL commissioner Roger Goodell and NBA commissioner Adam Silver among others.

PGA Tour spokespeople told GolfChannel.com that further comment on the call would come from the White House, and during his Sunday press briefing, Trump fielded a question about it.

“I want fans back in the arenas whenever we’re ready and as soon as we can,” the president said in his daily press briefing. “The fans want to be back. They want to see basketball and baseball and football and hockey. They want to see their sports. They want to go out on the golf courses and breath nice, clean, beautiful fresh air. I can’t tell you a date [when sports will start again], but I think it’s going to be sooner rather than later.”

The LPGA informed players on Friday that the next five events on the LPGA Tour calendar have been postponed, with four of those five tournaments rescheduled for later this year.

Amid another group of postponements on Friday came some positive news: the U.S. Women’s Open will be held this year.

In an announcement that four more events would be postponed, temporarily setting the LPGA Tour to resume June 19-21 at the Walmart NW Arkansas Championship in Rogers, Arkansas, the USGA set their new date for the U.S. Women’s Open — December 10-13 at Champions Golf Club in Houston, Texas.

“We are so thankful to all our partners for their flexibility and willingness to work with us during this very difficult time,” LPGA commissioner Mike Whan said. “This has been a truly collective effort to reschedule tournament dates and work together to provide LPGA players with as many playing opportunities as possible once it is safe for us to resume competing again. As we watch the world come together in this battle against this virus, we are so thankful for all of the support from our valued partners and we continue to wish for the health and safety of all the extended members of our global LPGA family.”

From The Country Club at Brookline to Seminole. It’s good to be Tom Brady.

Seemingly the only sporting event going on as somewhat normal is NFL free agency, and without a doubt, the biggest sports story of the past month, non-coronavirus edition, is former New England Patriots quarterback Tom Brady signing with the Tampa Bay Buccaneers.

While Brady and his family have begun to make the move to Florida, Brady shored up the ever-important golf aspect of his new hometown, and he did so in style.

Outside The Cut reported on Sunday that Brady has joined famed Seminole Golf Club. The report was later confirmed by Golfweek.com. The course, which is about 200 miles away from Brady’s Davis Islands home, is rated among the best in the world.