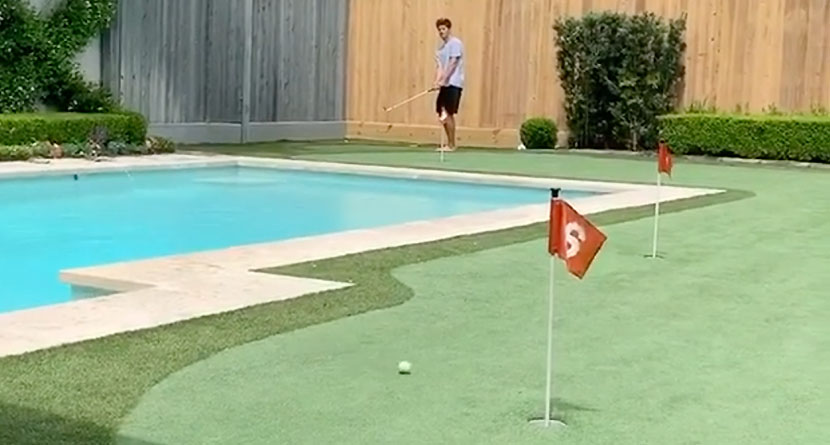 Few different ways to get to the same place #bored

University of Texas sophomore Cole Hammer is the eighth-ranked amateur in the world, and while he hasn’t made his Masters debut yet, he seems primed for the early-week practice rounds if his recent quarantine activities are any indication.

Stuck at home, Hammer posted a video of four different hole-outs on his backyard putting green, three of which included skipping a ball across a pool.

The same harbinger for speculation of an October Masters reschedule has manifested itself in reality now that golf’s organizing bodies have announced a revised major schedule for 2020.

According to a report from The Augusta Chronicle, hotel prices that were previously listed as low as $49 per night are now going for over $1,000.

“Certainly, it’s really, really good news,” said Sue Parr, president of the Augusta Metro Chamber of Commerce, which coordinates the local leg of the state’s Red Carpet Tour economic development event as well as the Masters Housing Bureau, a home-rental service on which many golf patrons rely for lodging.

“It will be a tremendous economic boon for this community and we’ll be able to do what we’ve always done,” she said.

Following the lead of industry leaders such as PGA Tour commissioner Jay Monahan, Callaway Golf CEO Chip Brewer opted out of his normal salary during the COVID-19 pandemic.

Brewer was paid a $900,000 base salary last year and took home $5.8 million including stock incentives last year, according to Golfweek.com.

Callaway’s 8K filing on March 25 noted that it was “proactively taking actions to significantly reduce costs and conserve cash in order to mitigate the impact of the coronavirus outbreak on its business.”

Other Callaway executives are taking a voluntary 20% pay cut as well while the company’s stock, which was trading for more than $21 per share, has nearly been cut in half, closing on April 6 at $10.58 per share.

We can’t play, but we can still prepare ?

I had a fun time today reliving my first @EuropeanTour win while getting ready for the next time we tee it up @TheHomeofGolf ? #StaySafe #OneDayAtATime @dunhilllinks pic.twitter.com/7ywHolISGy

While courses in Scotland are shuttered during the coronavirus outbreak, it’s still jarring to see an empty Old Course at St. Andrews. The most famous course in the world is allowed to continue with some maintenance, and the city has opened up the course as a public park for walkers.

2019 Alfred Dunhill champion Victor Perez took the opportunity to walk the course over the weekend with only a yardage book, scorecard and his dog in tow.