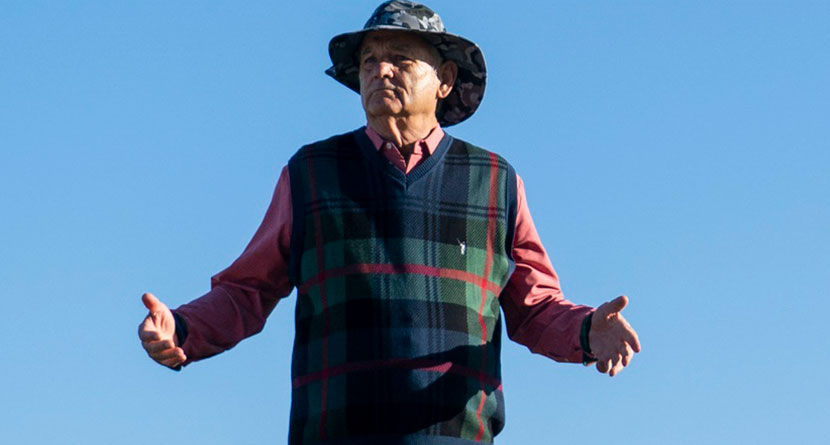 Does it get any smoother? ?pic.twitter.com/JlmZ6WOnxR

Bill Murray is as much a staple at the AT&T Pebble Beach Pro-Am as there gets, and on Saturday, Murray proved why he is such a fan favorite.

Always one of the smoothest guys in the field, Murray nonchalantly missed a 15-footer on the iconic par-3 7th hole, walked after it and backhanded it in without looking in a display that had to have made Phil Mickelson jealous.

He wasn’t done, either. As he is wont to do, Murray mingled with the crowd throughout his round, even taking up a fan on their offer of a shot of tequila.

Murray and his partners, D.A. Points, failed to make the cut into Sunday at the event.

Ernie Els will decline any further captaincy positions for the Presidents Cup, saying, “That’s as good as I can do.” https://t.co/dHEY8SDw7j pic.twitter.com/n8yWqzxUWA

Despite a disappointing loss at last year’s Presidents Cup, and a captaincy that by all accounts was exceptional, Ernie Els announced that he wouldn’t be taking up the International Team captaincy again in 2021 at Quail Hollow Club.

“That’s as good as I can do,” Els told The Morning Read. “I gave it all. This is another change I wanted to make in our team. I get one opportunity, win or lose. You don’t get a second chance.”

Ernie said he made the decision on Sunday night of the 2-point loss at Royal Melbourne, but had reconsidered “numerous times.” After meeting with PGA Tour commissioner Jay Monahan, who encouraged Els to take up the post another time, the Big Easy said he was done with it, save for one possible exception.

“I’m, like, I want to do it,” Els said. “There is so much of me that wants to do it, but I know the hardest thing is to step away. I can understand why people become dictators. You can get hooked on that power.

“If it ever goes to South Africa and I’m not too old. I’d like to be considered for that one.”

Phil Skipping WGC-Mexico (If He Qualifies)

I won’t be playing even if I make it. My kids have the week off so we are going on a trip after I shoot a commercial I have scheduled.

Phil Mickelson needed to hole an 8-footer for birdie on the 72nd hole at this past week’s AT&T Pebble Beach Pro-Am to slide into the top-50 in the OWGR and earn a spot in next week’s WGC-Mexico Championship. He missed the putt, which left him in a tie for 3rd place and on the outside looking in on the world top-50.

While the top-50 spot is one of the more coveted rankings in the world of professional golf, it wouldn’t have made much of a difference to Mickelson in the near-term. He told a fan account on Twitter that even if he did qualify for the event, he wouldn’t be going anyway.

“I won’t be playing even if I make it,” Mickelson wrote. “My kids have the week off so we are going on a trip after I shoot a commercial I have scheduled.”

Mickelson is in the field this week at the Genesis Invitational. He currently ranks 55th in the world.

No pressure, your captain’s watching!@TigerWoods checks in with his team on the range ahead of the 2020 Celebrity Cup. pic.twitter.com/0pf8OZe7O2

Thank you to everyone who came out to support @tgrfound at this year’s #CelebrityCup and to my co-captain @bubbawatson. Congrats to my winning team! pic.twitter.com/6w2xNNFiNG