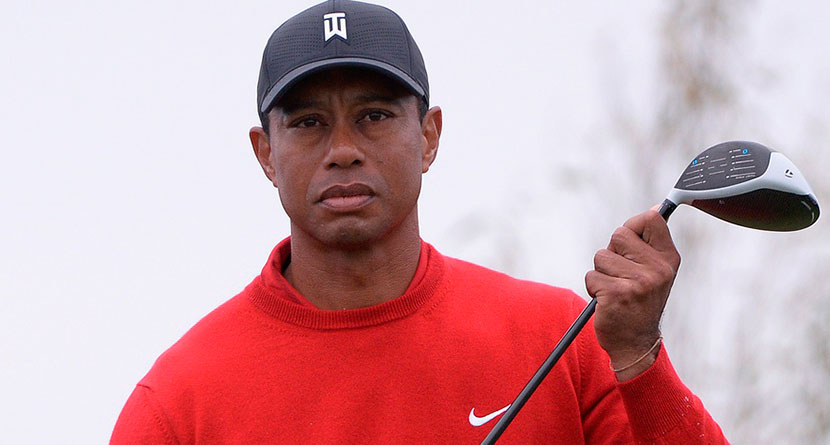 Tiger On Distance Insights: “It’s going to be probably…well after my career and my playing days that we will figure that out.” https://t.co/ij8Nyt3XJR

Speaking publicly for the first time since his post-final round interview at the Farmers Insurance Open, Tiger Woods met with the media on Tuesday at The Genesis Invitational where topics such as the USGA and R&A’s Distance Report was a topic of conversation, as was Woods’ potential involvement in the upstart Premier Golf League.

Here are Woods’ thoughts in their entirety.

Q. Tiger, how do you see the discussion around the distance insights study evolving and how would you like to see that discussion resolved?

TIGER WOODS: Well, I’ve always said that the game of golf, it’s fluid, it’s moving. The golf ball is certainly going a lot further than the balata days. We’ve changed it from using a tree to using high-tech metal. We’ve come a long way in this game. What’s been crazy, I’ve been a part of all that. My career when I first started, I beat Davis Love in a playoff and he was using a persimmon driver. To see the technology advance as fast as it has, the average distance was, from when I first came out on here, if you carry it 270, it took a lot of trouble out of play. Now guys are hitting their hybrids and 5-woods 270 in the air. So the game has evolved and it’s changed. We’re running out of property to try and design golf courses that are from the back 7,800 to 8,000yards, it’s difficult.But on top of that, we want to keep the game so enjoyable and we’ve trying to get more participation, and having the larger heads, more forgiving clubs, it adds to the enjoyment of the game. So there’s a very delicate balancing act where we’re trying to keep the game at, but also as we’ve all recognized, the players have changed over the years, too. When I first came out it was just Vijay and myself in the gyms and now seems like everyone has their own trainer and physios and guys got bigger, stronger, faster, more athletic like all sports.

Q. Just to follow up on that, can we put you down for bifurcation or do you still want to read the report and kind of think that through?

TIGER WOODS: Well, I think that is certainly on discussion, it’s on the table whether we bifurcate or not. It’s only one percent of the guys or women that are going to be using that type of equipment, but we want to keep the game enjoyable, we want to keep having more kids want to come play it. It’s so difficult now, I mean, with everyone walking around with their head down because they can’t get away from their mobile device to come out here and play a game that’s hopefully more on the slow side, we want to have that type of enjoyment. Part of the discussion going forward is do we bifurcate or not. That’s, you know, it’s going to be probably even well after my career and my playing days that we will figure that out.

Q. Tiger, have you personally been approached about the Premier Golf League concept and what do you think of the whole idea?

TIGER WOODS: Have I been personally approached? Yes, and my team’s been aware of it and we’ve delved into the details of it and trying to figure it out just like everyone else. We’ve been down this road before with World Golf Championships and other events being started, or other tours want to evolve and started. There’s a lot of information that we’re still looking at and whether it’s reality or not, but just like everybody else, we’re looking into it.

Q. Why do you think something like that would even have a possibility? Is there something not right out here that you would like to see better?

TIGER WOODS: I think that just like all events, you’re trying to get the top players to play more collectively. It’s one of the reasons why we instituted the World Golf Championships, because we were only getting together five times a year, the four majors and THE PLAYERS, and we wanted to showcase the top players on more than just those occasions. We came up with the World Golf Championships and we’re meeting more often. And so this is a natural evolution, whether or not things like this are going to happen, but ideas like this are going to happen going forward, whether it’s now or any other time in the future.

Awesome to be recognized in @SInow Fittest 50 with so many impressive names. I’m at the beginning of my journey, and it’s been a lot of hard work so thank you #SportsIllustrated. pic.twitter.com/qX3Bk7dNED

Sports Illustrated released a list — people love lists — of the top-50 fittest athletes on the planet last week as decided upon by a panel of three experts, and surprisingly a golfer was on the list.

“Say what you want about golfers being unconditioned: 26-year-old Bryson DeChambeau is obsessed with working out in the gym, focusing on core and other movements that he hopes will pay off on the course,” the list, which ranks DeChambeau as No. 24 in the men’s ranking, reads. “Besides bulking up, the 6’1″, 205-pound DeChambeau focuses on muscle activation techniques, strength and mental fitness.”

Of note, a golfer who wasn’t on the list, and who is likely taking umbrage with that fact: Brooks Koepka.

It’s no secret that Jason Day has had his fair share of health issues over the course of his 13-year professional career, but last week he talked about something that has become more commonplace in professional sports in recent years: early retirement.

Day has certainly made plenty of money, and given his inconsistent health, Day revealed that over the course of the last year while he was laid up with injuries, his previously-stated goal of retiring at 40 has crept more towards the present day.

“You feel like your world is kind of crumbling around yourself, especially as an athlete who plays injured,” Day said at Pebble Beach. “And it’s not a good feeling because there’s some dark moments in there that you got to kind of fight through. All last year I would sit there and think, ‘Okay, I don’t know how much I can kind of push myself through this.’

“I thought maybe I’ll re-evaluate things at 40. And I’m like, ‘Okay, if I can kind of push it to 35 then that would be good.’ But those are the things that go along in your head — as you’re an injured player, you think, ‘maybe my time is just coming around the corner and I might have to rack the clubs.’ And that’s a really terrible way of seeing it because I am only 32.

“I just, I honestly felt like I probably — and I’ve talked to my wife about this a lot. I’m like, ‘I think I’m nearly done here,’  just because of how much pain I was in. And then on top of it how stressful it is to play competitive golf week-in and week-out and try and live up to the expectations not only with yourself, but with what everyone else thinks that you should be doing.”

The Tiger Woods-hosted Genesis Invitational marks the first time in 2020 that such a large number of the best players in the world will get together and compete on the same golf course on the same week.

Thanks to Woods’ affiliation and the tradition of the tournament, the former L.A. Open was elevated to invitational status, which results in a smaller field, larger purse and better benefits for the winner.

Reminder of changes to Genesis now that it’s an “elevated status” event and on par with Bay Hill/Memorial:

Among those in the field are 9 of the top-10 in the world — only Webb Simpson is missing — and of course, Woods, who famously has never won at Riviera over the course of his career.